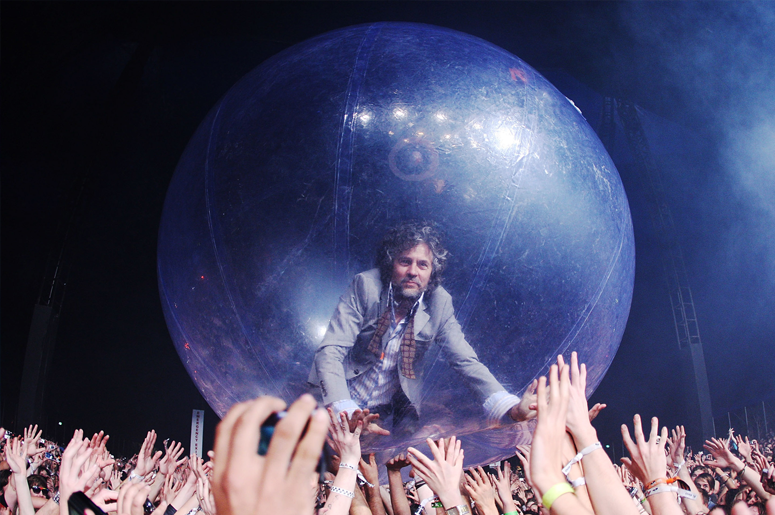 Always weirdly unique, The Flaming Lips have taken social distancing to a whole new and might we say, genius level.

Originating from a method long used by frontman Wayne Coyne as a staple of their show, the Lips successfully pulled off their first official "Space Bubble" concert at the Criterion theater in the band's native Oklahoma City.

The clever and creative effort to provide a COVID-safe atmosphere, included the Lips supplying 100 inflatable see-through pods, for up to three people to stand in while watching the performance. In addition to the audience members, Coyne and the other band members were enclosed plastic bubbles of their own.

Coyne shared footage from Friday’s concert in multiple posts on Instagram. Check out the epic shot from the crowd of Coyne holding up giant lettered balloons that read “F*** COVID-19” above, along with a video of band performing to the bubbled audience below.

Originally, the "Space Bubble" concerts were scheduled to take place in early December. However, after a test run at the Criterion last October, the events had to be postponed due to the rising number of coronavirus cases in the Oklahoma metro area.

When speaking to Rolling Stone this past December about the trial run and subsequent concerts to follow, Coyne was transparent (lol get it) about the whole process. “We collect everybody and then we take them row by row to their bubbles.”

He continued to explained, “the whole thing happened in 20 minutes from everybody being inside to everyone being blown up in their space bubble, and that’s the part of it that we wanted to work on. Once you’re in the bubble you can do whatever the f*** you want, and that’s the beauty of it. That’s what we spent most of the time figuring out. The music part of it, we got that s*** down.”

Coyne was adamant, “I don’t want anybody to think this is some kind of f***ing freak party. It’s a very restricted, weird event. But the weirdness is so we can enjoy a concert before putting our families and everybody at risk. And I think it can actually work, but just not when it’s this serious here. I think it’s a bit of a new normal, you might go to a show, you might not, but I think we’re going to be able to work it out.” Well, by the looks of it, work it out they did.

news
CDC to announce guidelines for those who are fully vaccinated as early as this week
sports
Shannon Sharpe doesn't like Mike Tomlin pointing fingers at others after Eric Bieniemy gets shut out
sports
Dan Campbell predicts Duce Staley will be a head coach in future
news
All known variants of COVID-19 have been discovered in Houston
sports
Dodgers' Mookie Betts favored to win 2021 NL MVP
sports
NBA player props: 3 best bets for Tuesday, March 2