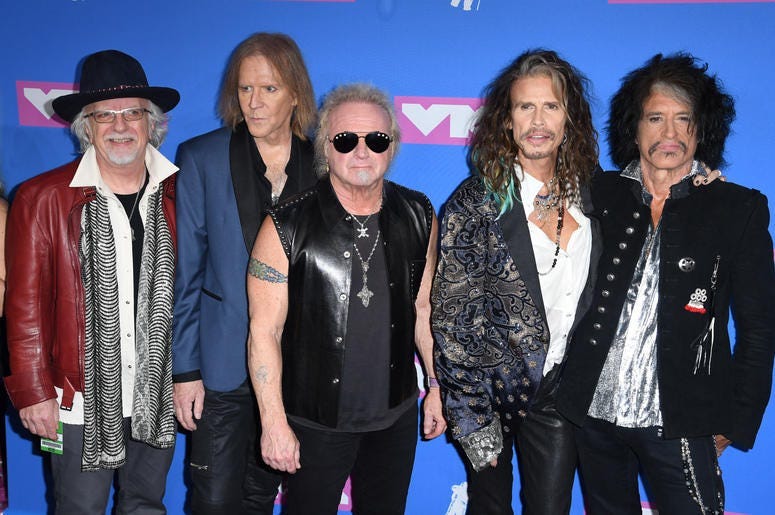 Aerosmith is hopping back in the saddle, and doing so in their original van. After the van was purchased on the History Channel Show “American Pickers,” the crew had it refurbished, and sold it back to the group. Aerosmith guitarist, Brad Whitford, made an appearance on a recent episode and shared some great stories about the van and the band’s early day.

The team is 🎶Back in the Saddle🎶 this week as they reclaim the famous @Aerosmith van! All new #AmericanPickers Monday at 9/8c on @History. pic.twitter.com/PVdPFXN8Ho

Back in 2018, Mike Wolfe and Frank Fritz, stars of the show “American Pickers” traveled to Chesterfield after hearing about the original Aerosmith band. The two bought the old school ride for $25,000, and got to work on making it look brand new.

In a recent episode of the show, Brad Whitford stopped by the garage to check out the van’s progress, and share the story behind the van’s eye popping art work. According to Whitford the man painted on the van is the original owner of the truck, Mark Lehman. “There’s a line in ‘Mama Kin,’ actually. Steven sings, ‘Bald as an egg at 18,’ and he’s singing about this guy.”

that was really cool to see brad whitford and hear his stories about the Aerosmith van...AND the aero van is gonna be at the aero vegas residency!!! man i would love to check it out 🤗

Cool episode. Awesome history on the Line from Mama Kin being related to the guy on the Van.

Fans were excited to hear these untold stories from the early days of Aerosmith. It was revealed on the show that not only did the “American Pickers” guys sell the band back their band, but the van will be making an appearance during the band’s Vegas residency. Just like the band, the van just keeps trucking along.