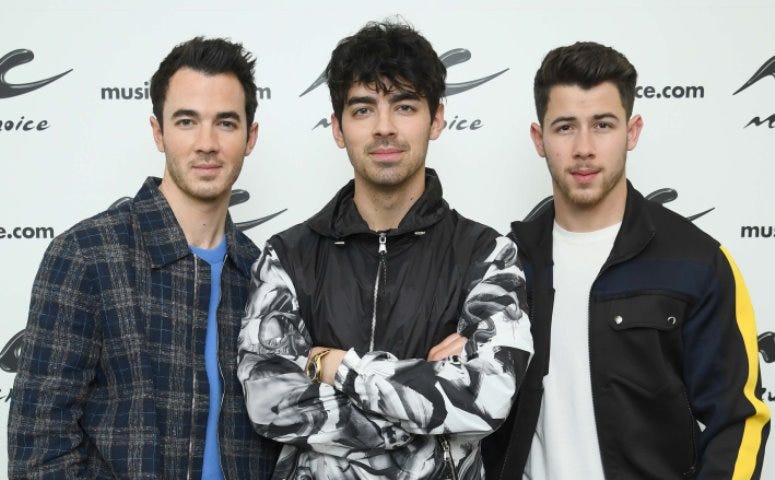 May 1, 2019 05/01/2019 5:10 pm
After landing big breaks with the Disney Channel, Hollywood Records, and four albums including 2005's It's About Time, 2007's Jonas Brothers, 2008's A Little Big Longer and 2009's Lines, Vines and trying Times, plus an American Music Award for "Breakthrough Artist", the group broke up in 2013.
Last year Nick Jonas married Priyanka Chopra, brother Joe is engaged to Game of Thrones co-star Sophie Turner, and on March 1 this year, the band reunited with the release of "Sucker", their first #1 single, which debuted at #1 on the Billboard Hot 100.
Now, The Jonas Brothers are planning their "Happness Begins" tour, their first in North American tour, wit 40 cities on their roster, including... Dallas!

The Jonas Brothers "Happiness Begins" tour will start Aug. 7 in Miami and lead to their Wed. Sept. 25th American Airlines Center performance. They also have a Thursday Sept. 26 show at Toyota Center in Houston and a Friday Sept. 27 show at AT&T Center in San Antonio. Yes, our own Jonas Brothers are planning to do their best to cover as much of the Lone Star state as possible for this tour.

Presales with American Airlines/Mastercard begin May 7, verified fan presale is May 8, Tidal/Ticketmaster/LiveNation May 9, and general ticket sales begin Friday May 10.

The Jonas Brothers "Happiness Begins" album will be out soon!

Best wishes to Nick, Joe and Kevin for a fantastic tour, and thanks for remembering their original home state of Texas!

music
Leaked Trump administration document says Billie Eilish is 'destroying our country'
news
Trump administration shares border wall progress days before Election Day
sports
Should Trevor Lawrence try to steer himself away from the Jets?
music
Dustin Lynch and Mickey Guyton aid farmers during COVID with 'The Farm Must Go On' concert
music
Lauren Jauregui says sexual comments about her with Camila Cabello made her 'feel like a predator'
music
RADIO.COM LIVE Check In: Garth Brooks and Trisha Yearwood reveal there's another 'legend' singing on 'FUN'