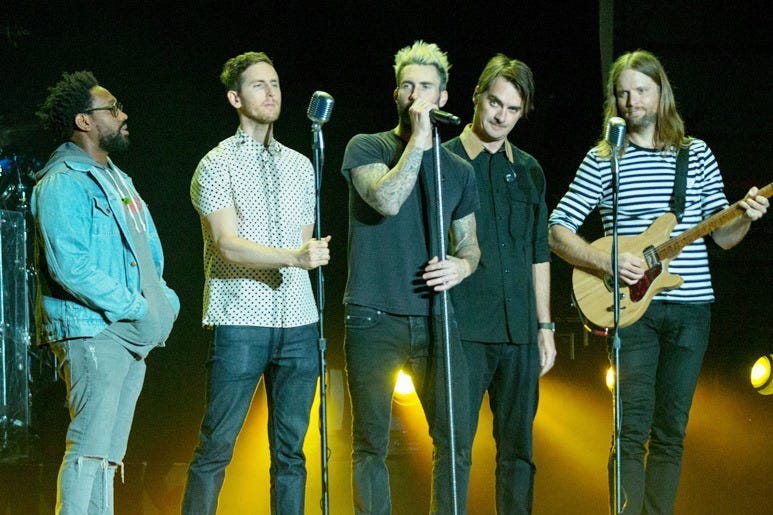 January 9, 2019 01/09/2019 4:06 pm
Hollywood Life reports Maroon 5 is having difficulty in getting others to join them for the Super Bowl half-time show and one of their sources says, "So many artists  — especially those in the hip hop community — don’t want to do a free show for the NFL after all the Colin Kaepernick fallout and controversy. All this is well documented and known but Adam feels that he has an ace up his sleeve to change the conversation and has invited TheRolling Stones to join them.”
The Hollywood Life source source says, “Everyone knows Maroon 5’s monster hit, ‘Moves Like Jagger’ so the idea from Adam [Adam Levine> came very easily to have them perform it with Mick and the gang. Adam would love to have a few other Stones classics be played on top of that. Adam feels that it would be great to get the Stones to a newer audience and it would clearly help their tour as it also would be a dream come true for Maroon 5 to perform with such icons.”

The source continued, "They have asked and nothing is at all confirmed, but Adam is really pulling for it and hopes that Mick and Keith and the band will say yes. Either way they are expecting a confirmation or a denial from the Stones in the next week because as everyone knows we are getting dangerously close to the game and Maroon 5 has to lock down their set."

Would you like to see Maroon 5 and The Rolling Stones do the Super Bowl half-time show together?