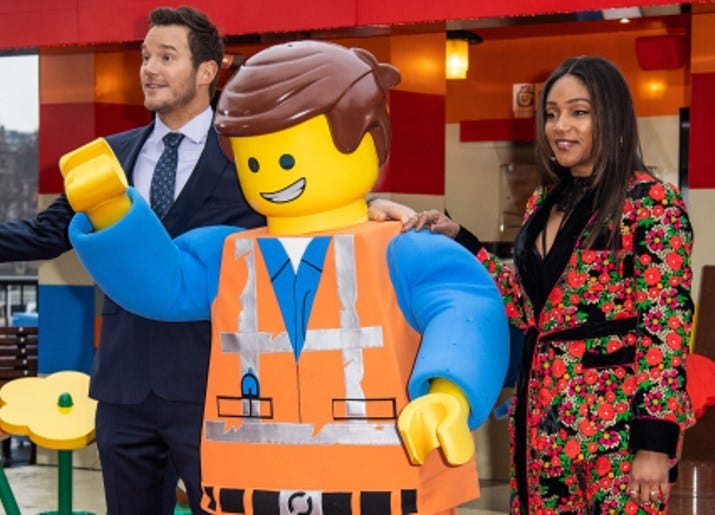 Inspired by the Nancy Meyers hit romantic comedy What Men Want, this film follows the story of a female sports agent (Taraji P. Henson) who has been constantly boxed out by her male colleagues. When she gains the power to hear mens' thought, she is able to shift the paradigm to her advantage as she races to sign the NBA's next superstar.

Critics: "Admittedly uneven but easy to like, What Men Want proves a gender-swapped remake can work -- and the odds are substantially improved with Taraji P. Henson in the lead. 48% Like", according to Rottentomatoes.com.
Blake: the talented Taraji P. Henson can't save this re-make of Mel Gibson's What Women Want (2000) from mediocrity, but it does show she's worthy of better, and I feel that's just around the corner for her! 2.5 of 5 stars
The Prodigy - Rated R
In her much-anticipated foray into the horror-thriller genre, Golden Globe and Emmy nominee Taylor Schilling stars in The Prodigy as Sarah, a mother whose young son Miles' disturbing behavior signals that an evil, possibly supernatural force has overtaken him. Fearing for her family's safety, Sarah must choose between her maternal instinct to love and protect Miles and a desperate need to investigate what -- or who -- is causing his dark turn. She is forced to look for answers in the past, taking the audience on a wild ride; one where the line between perception and reality becomes frighteningly blurry.
Critics: 52% Like, per Rottentomatoes.com.

Blake: the possessed-child genre continues, and in a stereotypical manner. Pretty much predictable from beginning to an ending, which someone without a writing or film background could have written in a more intriguing way. I found the movie such a joke a times, that I laughed out loud. If you're not familiar with this type of movie, watch it. If you are, see something else. 1.5 of 5 stars.

Cold Pursuit - Rated R
Cold Pursuit, an action thriller infused with irreverent humor, stars Liam Neeson as Nels Coxman, a family man whose quiet life with his wife (Laura Dern) is upended following the mysterious death of their son. Nels' search for justice turns into a vengeful hunt for Viking (Tom Bateman), a drug lord he believes is connected to the death. As one by one of Viking's associates "disappear," Nels goes from upstanding citizen to ice-cold vigilante, letting nothing -- and no one -- get in his way.
Critics: per Rottentomatoes.com, "Cold Pursuit delivers the action audiences expect from a Liam Neeson thriller -- along with humor and a sophisticated streak that make this an uncommonly effective remake - 81% LIKE."

Blake: revenge is a dish best served cold? That's true here, with Liam Neeson! Ice-cold justice is served in this re-make about a hurting father taking vengence for the drug-related loss of his son. The action you expect with Liam Neeson is well delivered, plus dark humor, which adds a different element to Liam's mix.  A hard cold and exact movie that earns 4 of 5 stars!

The LEGO Movie 2: The Second Part - Rated PG
The much-anticipated sequel to the critically acclaimed, global box office phenomenon that started it all, "The LEGO (R) Movie 2: The Second Part," reunites the heroes of Bricksburg in an all new action-packed adventure to save their beloved city. It's been five years since everything was awesome and the citizens are now facing a huge new threat: LEGO DUPLO (R) invaders from outer space, wrecking everything faster than it can be rebuilt. The battle to defeat the invaders and restore harmony to the LEGO universe will take Emmet (Chris Pratt), Lucy (Elizabeth Banks), Batman (Will Arnett) and their friends to faraway, unexplored worlds, including a strange galaxy where everything is a musical. It will test their courage, creativity and Master Building skills, and reveal just how special they really are.
Critics: "While it isn't quite as much fun as its predecessor, The LEGO Movie 2: The Second Part fits neatly into an animated all-ages franchise with heart and humor to spare. 84% LIKE", according to Rottentomatoes.com.

Blake: ah, my sources say the toys are ready to play, but not in the way this sequel should have gone. Yes, it's fun, families will watch, and the morals of the story continue, but just not as brilliantly as it's predecessor. Popcorn, humor, and money will be flying out of pockets for this 90mins of escapism. 4 of 5 stars

The chilly weekend will have theaters busy, especially with Cold Pursuit and The LEGO Movie 2: The Second Part!

Enjoy a NEW movie this weekend!