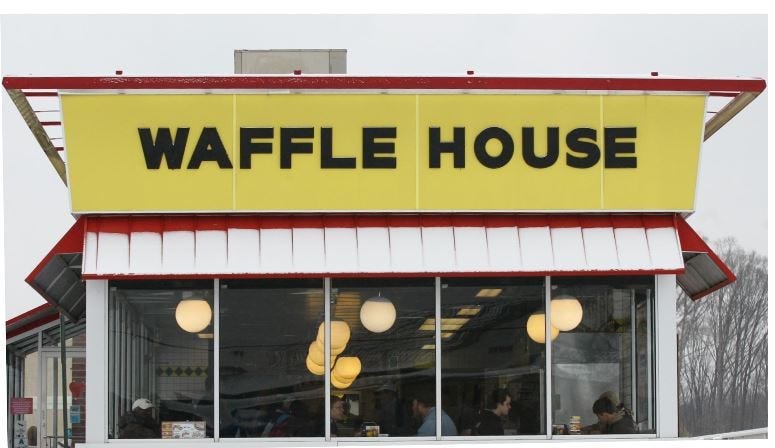 The police report indicates Zobrist ran from the location, leaving personal belongings. The employee moved Zobrists belongings to the back of the restaurant so she could retrieve them should she return.

Zobrist did return, sitting at the back door to the restaurant. When she was asked again to leave, she became verbally abusive, began cursing, and threatened the employee, saying she would return with a gun and shoot him in the face, shoot all of the employees, and shoot everyone in the restaurant.  Whew!

Here's where entertainment portion of the incident began.

Zobrist proceeded to the middle of the Waffle House parking lot... pulled her pants down, exposed herself, began dancing around the parking lot, and approached the employee, trying to grab his you-know-whats! The employee resisted... and Zobrist licked his face!

The employeed again asked Zobrist to leave, and that's when she poked him in the chest with her finger. When he tried to enter his vehicle to leave, she began dancing naked in front of it.

Soon, Escambia County Sheriff's deputies introduced themselves, and Zobrist has been charged with:

Zobrist is scheduled for court on Feb. 11th.

​Wonder if she just felt she didn't get enough butter and syrup?

"Florida: The Second Chance State". Make a mistake, chances are you'll get a second chance in Florida, and they may throw in a Waffle.