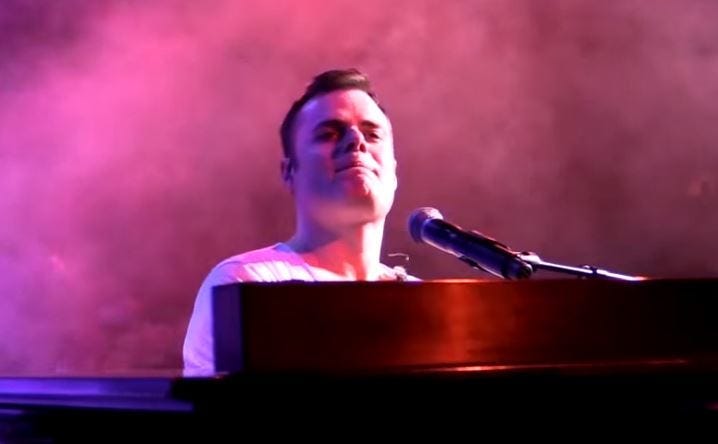 Marc Martel of Montreal, grew up in a Christian based home (his father a pastor and his mom a choir director), all while listening to Christian music plus his favorite, George Michael. While in college, Marc started the Christian rock group called "Downhere" which earned a record contract in 2001, and he moved to Nashville to pursue his music dream.

After 7 albums with "Downhere", that musical path came to an end and in 2011, Marc learned of Queen's Roger Taylor assembling an authorized band titled the Queen Extravaganza, and submitted the following audition that went viral.

If you don't recall Marc Martel & Queen Extravaganza from American Idol in 2012, here's a refresher.
What happens when a movie titled Bohemian Rhapsody is being made and a time comes when additional Freddie Mercury vocals are needed but unavailable... you make a call... to Marc Martel.
The New York Times recently spoke with Marc, who receives a minor credit in the movie ("additional vocals"). However, due to a nondisclosure agreement, Martel was not at liberty to discuss the details as to how much and where his vocals were used in the making of the movie.
Marc told the New York Times the first time he watched the movie was at a theater near his home in Cool Springs TN, where he purchased an entire showing to share with his wife, manager, and 80 of his closest friends.
Last year, Martel released an album of Queen cover songs titled, "Thunderbolt & Lightning." and told the New York Times that Queen's music has helped improve his singing and given him reason to care more for his voice.

Currently, Marc tours regularly with his own Ultimate Queen Celebration, plus performs with the Black Jacket Symphony, Symphonic Queen, and has concerts scheduled this year in 14 countries. In addition, he writes songs and hopes to have an opportunity to add one of his originals to a show.

Wonder if Roger Taylor and Brian May have songs they wanted to record with Freddie? Wonder if they will get together with Marc to create new material? One can wonder... :).

Continued success and best wishes to Queen and Marc Martel.