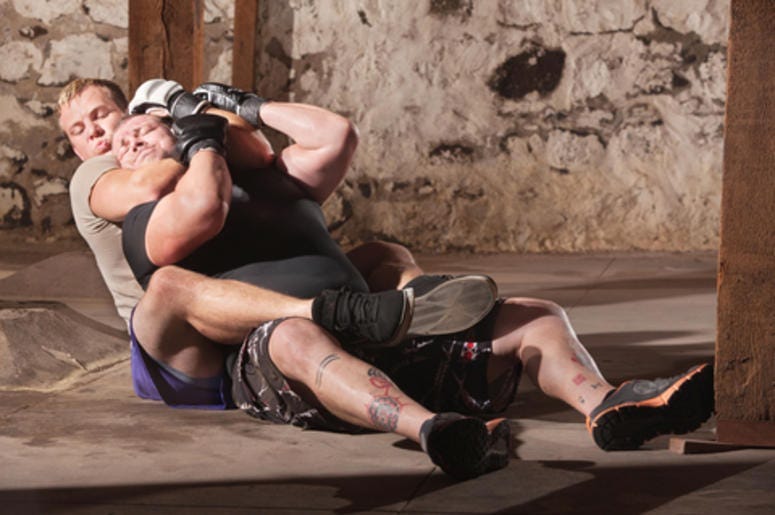 These newlyweds are pretty hardcore. They skipped the traditional first dance and had a wrestling match instead.

Nick Boulanger and Alex Bravata are both from Texas and love professional wrestling. When the two decided to tie the knot, they both knew they wanted to leave their guests with a lasting impression of their wedding. What better way than with a wrestling showdown?

It wouldn’t seem quite believable for the two to wrestle each other, so they brought in local wrestler Steve Patin, who goes by Steve O Reno in the ring. The three of them came up with a script that would make Patin seem like Bravata’s ex-boyfriend who came to crash the wedding.

Boulanger told People magazine that Patin was all for this wedding reception match, “He absolutely loves wrestling and he’s a true professional, the stuff he goes through, like getting thrown over tables, hit by chairs! And we worked together to develop a script and he was very professional. He would redline it and add his own creative input and everything.”

The group had to build their own table to help create an unforgettable moment. Patin would come in and start a shoving match between him and Boulanger that would escalate into a brawl and end with a chokeslam into a table.

The best part about their whole staged wrestling match was that the only ones who knew about it were the groomsmen. All of the other guests had no idea what was going on and Patin's performance helped sell the whole thing extremely well.

Check out the footage from the reception down below.

Last night our wedding went off without a hitch. Until Alex’s ex @steveauxreneaux showed up and tried to put a stop to the wedding... There was only one possible way to resolve the situation 😏