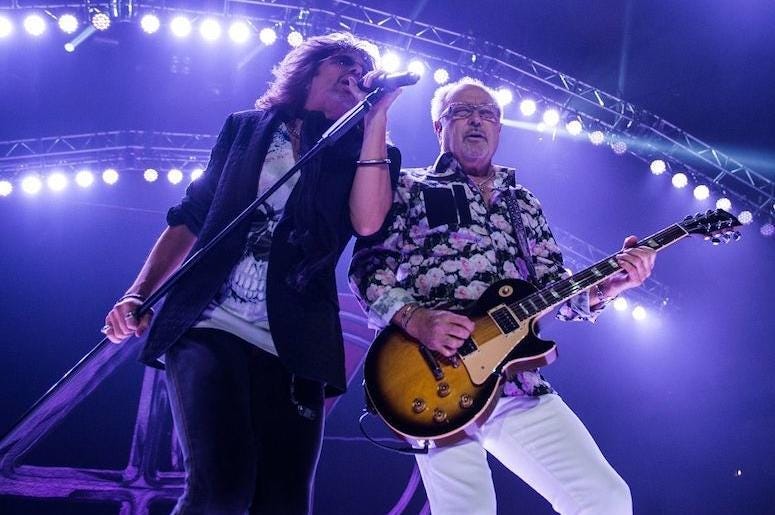 Mick Jones of Foreigner was inspired to write one of the band's biggest hits after soundcheck before a concert in Cincinnati.

He told SongFacts in 2009, "We'd gone to the arena for a soundcheck, and it was pouring down rain, and there were a bunch of fans waiting at the door. ... When we came back for the show later on, all that was left was one lonely fan, a young guy waiting out there in the rain, soaked to the skin. I thought, ‘Well, he's waiting like five hours here, maybe we'll take him in and give him a glimpse of what happens backstage at a show.'"

Watching the young fan become mesmerized by his surrounding backstage was the inspiration for the song "Juke Box Hero."  Jones continued saying, "I saw this look in his eyes, and I thought, ‘He’s seeing this for the first time, he's having this experience.’ … I just imagined what was going through his mind. And I'd been toying with this title, 'Juke Box Hero.’ I thought it was almost a satire on what we did and how it was perceived from an audience level and public.  That's how it originated."

Now, the band is offering a one-of-a-kind VIP experience, coinciding with the launch of their new musical, Jukebox Hero: The Musical, if that fan in Cincinnati who inspired the song can be found.

And in case the fan cannot be found, Foreigner is accepting submissions about the most dedicated fan who went to the greatest lenghts to prove their loyalty to a band.  The winner will join the band at the world premiere of Jukebox Hero: The Musical!

Entries are being accepted HERE.