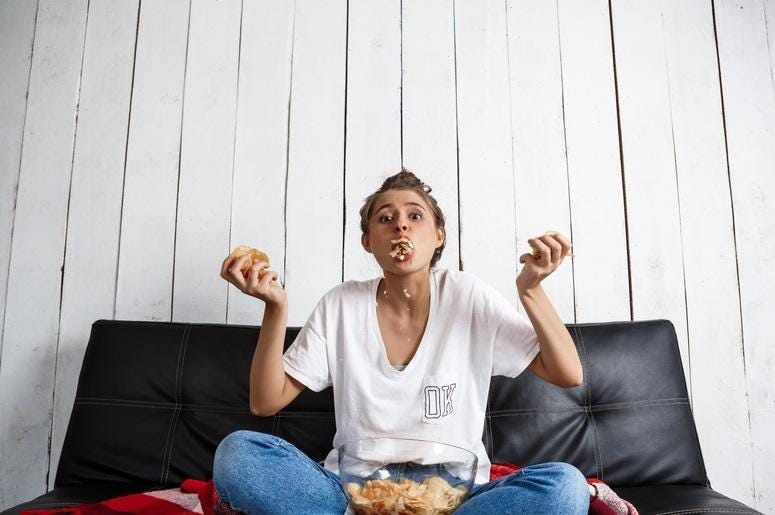 Eating chips and scrolling through phone apps are two of mankind’s favorite things to do, but they are two things that do not mix well. Whether its greasiness from the chips or the dreaded orange dust of Cheetos fingers, snack time and phone time often conflict. That’s why one Japanese snack maker has come up with a hands free chip product, and the internet is torn on this potential snack game changer.

Tokyo based snack company, ‘Koike-ya,’ came up with this new snack and bag design made to allow people to easily drink their chips. The chips come in a variety of flavors and are splintered, making it easier for consumers to pour and drink the snack. The product was originally made to allow people to easily get to the crumbs at the bottom of the bag. While this product wasn’t originally made to keep people’s phones clean from chip dust and grease, the company decided to take that path, once they realized what an epidemic greasy phone had become.

In their tweet promoting the product, ‘Koike-ya’ wrote what translated to, “Cold winter. I don't want to release his hand. But I really want to eat karamacho.” While this product has gained popularity since being released, the internet is torn on how to feel about the product. One twitter user wrote of the chips, “Drinkable potato chips so you don’t get your hands greasy? The news I’m here for.”

Drinkable potato chips so you don’t have to get your hands greasy? The news I’m here for: https://t.co/7tG0ogi6eM

Drinkable chips! Only Japanese with the lowest BMI & the highest life expectancy can afford this! But a good tip for health food companies to win over the eating & posting generation :) https://t.co/ZG7IAY0pEY

Other social media users weren’t as positive about the multitasking product. One twitter user wrote, “Is this for people who’ve never heard of a napkin?” Of course they are not the first to offer a hands free option for their food. McDonalds in 2017 introduced the “frork” along with the “frylus” last year, which allowed people to eat and not need to touch their phone screen, while taking selfies.

Is this for people who’ve never heard of a napkin? A paper towel? Or I don’t know...enough self control to put down their phone!
'Drinkable' potato chips: the products keeping your phone grease-free https://t.co/hyV8Sc0YKF

Glad so much thought has been given to this serious dilemma of eating and being on your phone at the same time 😳! Drinkable' potato chips: the products keeping your phone grease-free https://t.co/YyPexfzpdA

Really? You can't put your phone down when eating crisps?
'Drinkable' potato chips: the products keeping your phone grease-free https://t.co/1NbPTR5QE7

While the interne tis clearly torn on if this product is good or not, it is clear this snack company is trying to change the game. Koike-ya’s product is yet to make it over to the United States, but with its social media popularity, hopefully it gets here soon. It seems like this is a product made for Americans. Snack time should never get in the way of phone time!