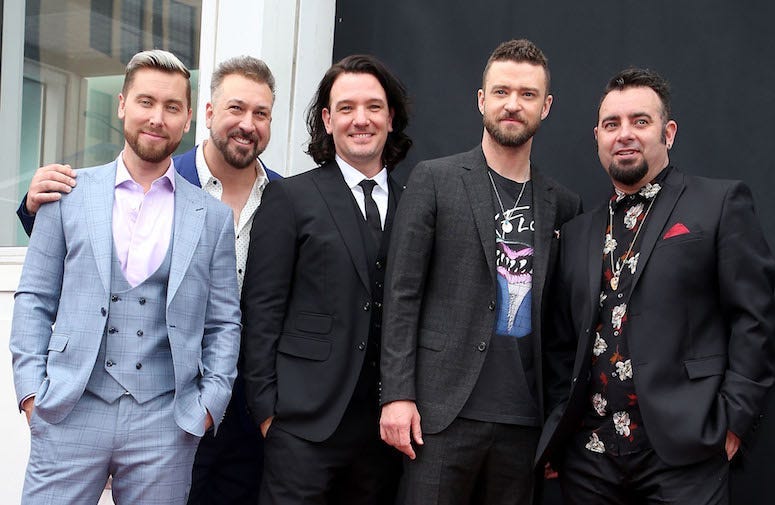 Photo credit (Photo by F. Sadou/AdMedia)
By Miles In The Morning 98.7 KLUV

Could a full fledged 'NSYNC reunion be on the horizon?

After their appearance (minus Justin) at Coachella, Lance Bass said, "There are many, many things coming across our desk because of Coachella that we would be stupid not to discuss and look at.  Coachella was incredible and it was a big moment for ‘NSYNC."  With that in mind, Bass also said that the band will "sit down" this summer and "figure it out," regarding a potential reunion.

While it would be great to see all five on stage together again, there's a possibility the rest of the group might reunite without Timberlake.  Joey Fatone told US Weekly, "We have to have the conversation, even without Justin. The whole thing about it is it’s really awkward. It’s not awkward, but it’s weird.  People will be like, ‘If Justin doesn’t do it, the group’s not gonna do it.’  That wasn’t even the case.  That’s not even the conversation. Everyone’s heads are in different times and different places in our lives."

Even if the other four do reunite for shows, is is still 'NSYNC without JT?

sports
Should Trevor Lawrence try to steer himself away from the Jets?
music
Dustin Lynch and Mickey Guyton aid farmers during COVID with 'The Farm Must Go On' concert
music
Lauren Jauregui says sexual comments about her with Camila Cabello made her 'feel like a predator'
music
RADIO.COM LIVE Check In: Garth Brooks and Trisha Yearwood reveal there's another 'legend' singing on 'FUN'
news
Trump, Biden fight for Florida, appeal for Tuesday turnout
news
3 dead in church attack, plunging France into dual emergency