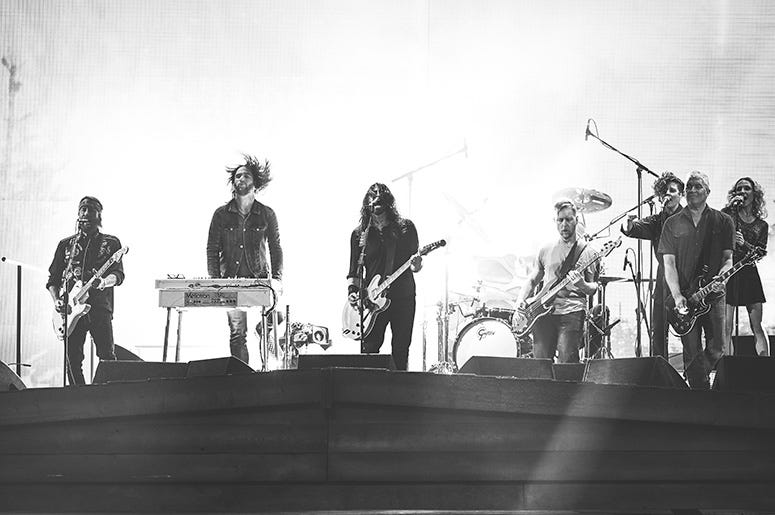 The Foo Fighters posted up in recliners, popped some popcorn and flipped through old photos to celebrate their illustrious 25 years playing music together in the new special Times Like Those.

Dave, Nate, Pat, Taylor, Chris and Rami gathered in a quasi-home theater and provided insider commentary on halcyon snapshots projected onto a giant wall. The guys reminisce about a 2003 trip to Iceland, which featured a picture of Nate Mendel laying hungover on a plane and a home movie of the Foos jumping into some chilly water.

We also get many looks at Dave Grohl’s infamous 2015 broken leg show in Sweden. “I was like ‘Damn, this is going to be a great show,’” Dave says, flipping through pics. But not only did he suffer a broken leg, and keep playing, thunder bolts and rain pressed on the group from above.

Some bands might have called it a night. “The show must go on,” he said, as the group laughed over a picture of Grohl playing atop a guitar throne.

It’s been a busy quarantine period for the Foos. Earlier this month, the group played a set live streamed at the iconic Roxy Theater in Los Angeles. It was a night filled with standby classics and a few new tracks. They premiered the latest single, “Shame Shame,” off their forthcoming 10th album Medicine at Midnight.

The group also announced a special December 15 live stream collaboration with Amazon Music. The exclusive performance hopes to keep the “spirit of the school holiday pageant virtually,” a press statement reads. Check out more info at their website.