Jimmy Fallon is back on set!

After months of filming the “Tonight Show” remotely at home, the late-night talk show host returned to his studio at NBC’s Rockefeller Center in New York City.

On Monday, Fallon announced that he hopes the setting will provide a sense of normalcy for viewers even if the show will continue on without a studio audience during the pandemic.

“Normalcy, any type of normalcy, feels great,” he said swapping his signature suit for a casual sweater. “So hopefully we can put a smile on your face an hour every night and let you sit back and relax while we try to bring you a little bit of normal,” he added.

Fallon’s band, The Roots, also reported for duty to provide the show with some groovy tunes.

“I'm here to show you that there is a light at the end of the tunnel if we keep each other safe,” Fallon said.

The intro of the episode was updated to show Fallon “walking” to work with his mask on. Upon arrival at Rockefeller Center, he pulls down his mask to show the security guard that he is an employee of the building.

During his monologue, Fallon also assured audiences that the crew is taking the pandemic very seriously. Behind-the-scenes, the staff could be seen wearing face masks and shields and practicing social distancing the whole time. He added that everyone also tested negative for COVID-19. 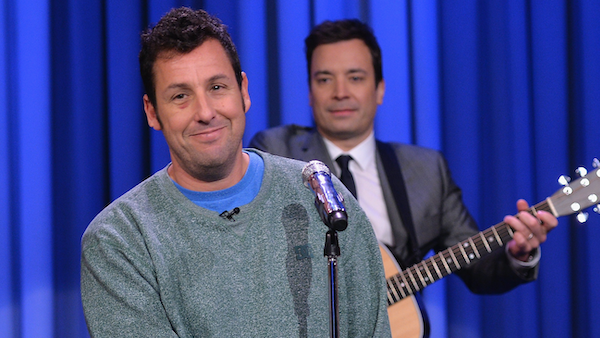 Fallon is the first late-night show host to return to the studio.

Unfortunately, with coronavirus cases spiking in the U.S., the guests of the evening – New York Gov. Andrew Cuomo and Charlize Theron – continued to join in virtually.

Following a television and film production shutdown in mid-March, Fallon and other late-night hosts including Jimmy Kimmel and James Corden have been doing their best to entertain audiences at home.

Fallon’s “at-home” show was a full-on family affair as his wife and daughters stepped in to help put the show together. His daughter, Winnie, provided the music and graphics, while his wife Nancy helped with filming.