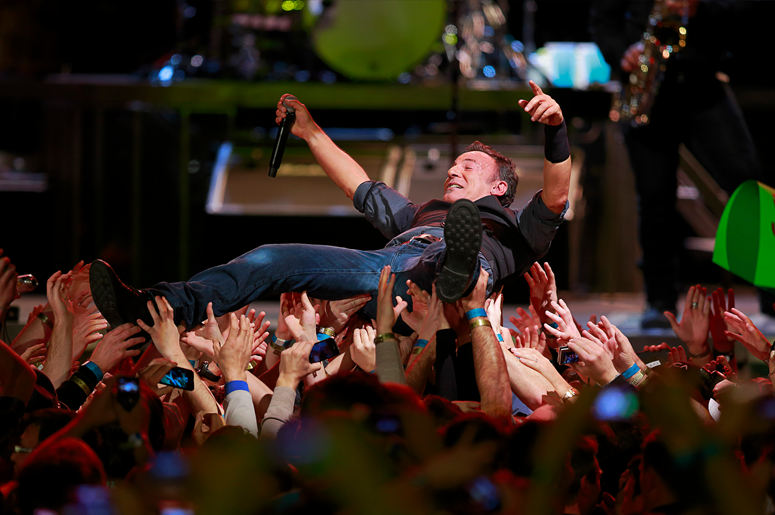 It’s surf’s up at the Rock & Roll Hall of Fame as far as Bruce Springsteen is concerned, and no were not talking about him surfing the crowd.

We’re talking about actual waves, as in the ocean, which the rocker was actually pretty heavy into once upon a time. And as of January 18, Springsteen’s surfboard is now on display.

Re-opening to the general public “with proven health and safety precautions in place to protect staff and guests,” according to a Hall press release.

With it’s recent inclusion, the surfboard is now keeping company to Springsteen’s former 1969 Chevrolet Chevelle, which was loaned to the Hall by the car’s current owner, long-time Springsteen sound engineer Toby Scott.

While most find the Jersey native’s self-claimed “surfing days,” a surprise, Bruce argues those familiar with the terrain of the Jersey Shore, should know that while not big, the waves are still there.

As a matter of fact, the E Street Band members hit the beach often during their early days. Actually, Springsteen even lived in a surfboard factory, Challenger Eastern Surfboards in Ocean Township,  which was owned by Carl “Tinker” West, who also  happened to be the manager of the pre-E Street Band, Steel Mill.

As Springsteen noted in Ocean Township filmmaker and surfer, Jeff Salmon’s 2016 documentary, “we were from Freehold and there wasn’t any surfing there, but it was the surfers who worked at the surfboard factory who got the band into surfing.”

Among the surfing crew and also interviewed, was Vini “Mad Dog” Lopez, the original drummer for the E Street Band who was the group's best surfer. Speaking about the surprisingly yet-to-be-released film that explores the colorful history of surfing at the Jersey Shore, Salmon stated, “they’d go surfing pretty much every day of the week… Asbury Park, Long Branch, they’d be at the beach surfing and then go to clubs at night.”

Springsteen’s surfing habits, stem from his love of the ocean, which he particularly favors at night. As he admitted during his "From My Home to Yours" radio show in July, "there is nothing like the sea at night when the water is slightly warmer than the air, even though the air is humid after a 95 degree day,” said Springsteen.

“God, I love swimming at night. It is all darkness and mystery. It is the void and it must be done naked. Clothes at the waterline, please. Do this, and my pilgrim, you will become cleansed. Never will the evening air, or a kiss on the beach, or a dry towel, ever feel so good again. The walk to the car will be filled with starlit grace and you will never forget it. Once you hit the water, you will be covered in the blossoming beauty of your youth no matter how old you are and whoever you're with, you will always remember them.”