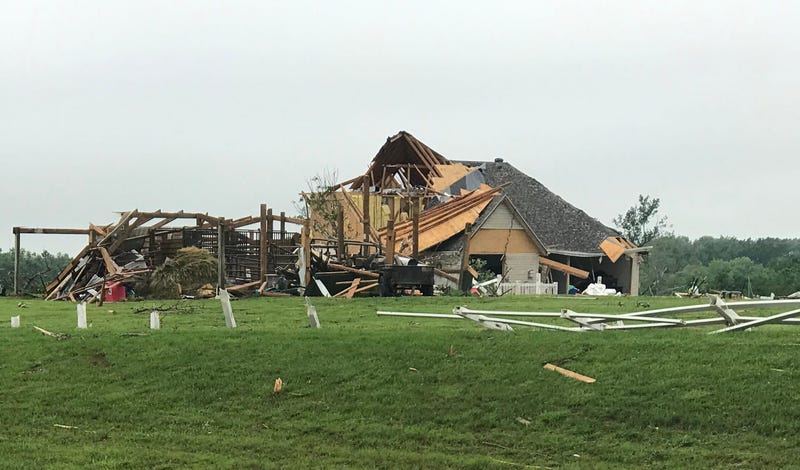 Parts of Pennsylvania and New Jersey also were under tornado warnings hours after a swarm of tightly packed twisters swept through Indiana and Ohio overnight, smashing homes, blowing out windows and ending the school year early for some students because of damage to buildings. One person was killed and at least 130 were injured.

The storms in Kansas City Tuesday were the 12th straight day that at least eight tornadoes were reported to the National Weather Service.

NewsChopper 9 was in the air and captured the massive wedge tornado on the ground just west of Bonner Springs near I-70. This storm struck the area around 7 p.m., and it’s the same tornado that destroyed “dozens and dozens of homes” in Linwood, Kansas. https://t.co/TdmQuI1vAu pic.twitter.com/mETnL0GVhd

After several quiet years, the past couple of weeks have seen an explosion of tornado activity with no end to the pattern in sight.

A large and dangerous tornado touched down in Douglas County, Kansas, late Tuesday, the National Weather Service office reported. At least a dozen people were admitted to the hospital in Lawrence. Homes were damaged or completely destroyed in the towns of Linwood, Bonner Springs and Pleasant Grove in Kansas.

But the Kansas City metropolitan area of about 2.1 million people appeared to have been spared the direct hit that was feared earlier in the evening when the weather service announced a tornado emergency.

Mark Duffin, 48, learned from his wife and a television report that the large tornado was headed toward his home in Linwood, about 30 miles (48 kilometers) west of Kansas City.

The next thing he knew, the walls of his house were coming down.