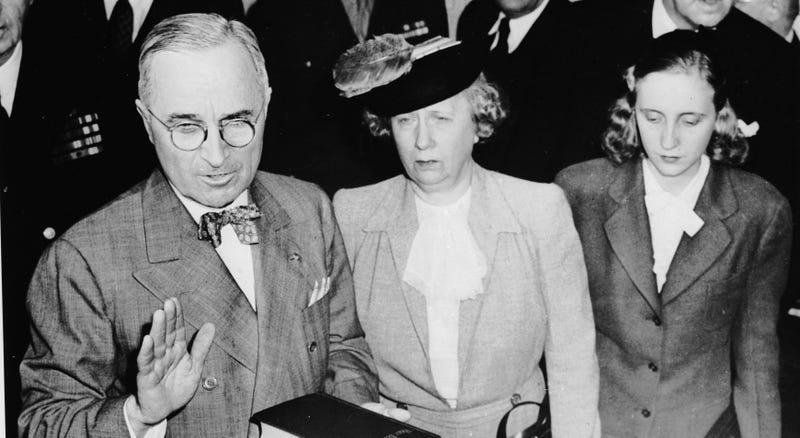 Independence, MO - This Sunday, April 12, marks the 75th Anniversary of Harry S. Truman being sworn in as the 33rd president following the death of FDR.

On that day in 1945, the then-vice president was relaxing with a congressional friend when he got a call to go to the White House right away.

Truman would later remark he felt as if the sun, the moon and the stars had fallen on him after being thrust into the role of Commander-in-Chief during World War II.

Those months in 1945 were easily the most momentous first four months of any presidency.

Within a day, Truman was informed of the Manhattan Project, as he'd been kept in the dark up to that point on the ultra top secret project to build atomic bombs.  A month after he was sworn in, the Nazis surrendered in Europe.  Then, in August, Truman decided to use A-bombs to end the war with Japan.

Once the war was won... then the peace. The former haberdasher from Independence had to guide the country into a peacetime economy.

This week's #MenuMonday shows the Truman's love for cocktails! Daiquiris before lunch, and Old Fashioneds before dinner. pic.twitter.com/HdVt1m6U9C

The Harry S Truman Library and Museum in Independence remains closed for renovations and is expected to reopen in September or October of 2020.