The National Hockey League and Adidas released their line of "Reverse Retro" jerseys for all 31 teams on Monday.

The "Reverse Retro" line of jerseys features each team in the league bringing back one vintage or retro jersey from the past and applying a current day twist to the uniform. These jerseys are said to be worn a number of times in the 2020-21 season, whenever the NHL gets around to getting something together amid the COVID-19 pandemic.

It is the first time the NHL and Adidas have really made an effort to let the creative juices flow with uniforms like the NBA and the English Premier League have done in the past.

Some of the jerseys that teams have brought back seem like no-brainers. Classic looks that are beloved by many fans, or just cool jerseys from the past that have that present-day look to it. Some teams did an alright job with their "Reverse Retro" look, while some teams completely dropped the ball in coming up with a unique jersey.

Which teams came away with the best jerseys, and which teams ended up flopping?

Jeremy White and Brayton Wilson teamed up to provide their thoughts on the NHL's "Reverse Retro" line, and gave their rankings as part of a tier list:

I can’t stop looking at them. The green/yellow color scheme is totally unique, and this should probably be Minnesota’s full-time jersey. It’s tremendous.

The logo they already have has an awful lot going on, so to simplify it with a scheme that no other team in the league uses is a huge score. Bravo to, of all teams, the Wild.

Crafted for the State of Hockey.

Feels like the Sabres followed the project to the letter. Throwback jersey that reverses some of the retro ideas. High marks for sticking to the assignment and incorporating the goat head as the shoulder patch, too.

Tier 1B: Wearing another team's jersey that looks nice

Congrats on the good looks. They’re not your team, so you get docked points.

Reaching out for nostalgia is good and all, but you sold out your own franchise for it. Minnesota gets a win for throwing back to the old colors with the current logo. Carolina and Colorado could have tried that and been huge winners.

Just my feel, don’t wear a crest of another team. Simple.

I liked the flaming horse, "Blasty" when they wore it before and I’m happy it’s back.

For me it’s just good. Feels like they went all out and they’ll get the props for the crazy retro idea.

Tier 3: At least you tried

You tried something different and that’s great, but none of you gets an A.

- Columbus Blue Jackets: Nothing that good.

- Pittsburgh Penguins: It’s something. That’s all.

- San Jose Sharks: Not that different.

- Vancouver Canucks: Gradient haters will be mad about it. There’s very little throwback in this one.

Tier 4: The teams that did not contribute to the group project

If you’re rolling out a jersey and I can’t tell if it’s new, you failed.

These teams failed to produce anything new or interesting. The jerseys are fine, I guess, right? No. They didn’t even bother with the group project. They re-hemmed a dress like Marge Simpson in the episode where the Simpsons join the country club.

They should be docked 10 points in the standings for this display.

Built on a Dynasty. 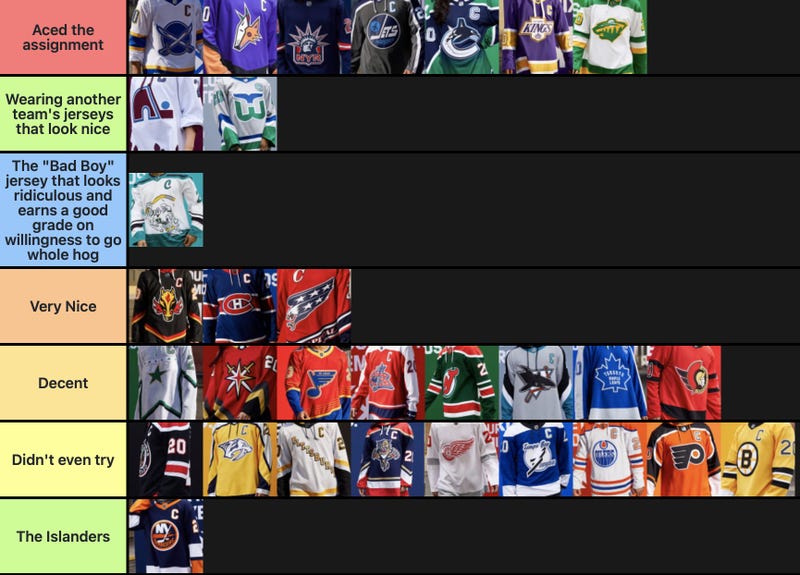 - Anaheim Ducks: Love the "Wild Wing" look, and the font that'll be used with these uniforms. Very '90s throwback, which I am always a fan of. Please go back to the Mighty Ducks days and completely shoot the bland "duck foot D" look to the middle of the sun.

- Arizona Coyotes: The purple is something completely different, but fits the color scheme for the Kachina look. These jerseys pop in every sense of the imagination, and are a slam dunk. Side note: Just bring back the Kachina jerseys as your full-time jerseys, Arizona.

A desert classic built to howl.

- Buffalo Sabres: What's not to love about this jersey? The "butterknives" look is sharp, the font from those jerseys are great, plus the goat head is incorporated as a shoulder patch. I know a lot of people aren't a fan of the "Buffalo" look on the bottom, but it adds a nice touch to a great jersey. The royal blue and gold touch to these jerseys are also grand.

- Los Angeles Kings: The Kings' purple and gold days don't get enough banter on how spectacular it looked. This jersey is a perfect combination of the purple and gold color scheme from 1967-88 and the Kings' logo from 1988-98. Marvelous.

- Washington Capitals: Like the Sabres' "butterknives" look, the Capitals took their blue jerseys from 1995 to 2000 and threw the current colors into the mix, and boy do they look stellar. The "screaming eagle" look is classic, the shoulder patch logo is timeless, and the font of the jersey is sharp. It just screams Washington, no pun intended.

Sign up to be the first to know where to get your Screaming Eagle Reverse Retro: https://t.co/ZME26EbToH pic.twitter.com/Vlagu0ZDC3

Tier 1B: Not your jersey, but still awesome

Not to rip off Jeremy, but his point is very valid with these jerseys.

- Carolina Hurricanes: I love the Hartford Whalers look and the inclusion of "Pucky" as the shoulder patch. However, this just looks like a classic vintage jersey and nothing super unique. But that's completely fine. No need to completely ruin the look with Hurricanes colors. Look at the Hurricanes going off and doing cool things again.

- Colorado Avalanche: A slam dunk, right? Bring back the Quebec Nordiques look with the current Avalanche color scheme. Some hockey traditionalists may not like this look, but damn it's so nice looking. Colorado should bring back the original Nordiques third jersey as a third jersey, but that's just me. Maybe it's coming down the road.

Our past, our present, remixed for Avs Faithful.

- Calgary Flames: The "Blasty" jerseys don't get enough love. The flaming horse logo was something I liked seeing watching hockey growing up, and any Flames logo on a black jersey is just so sharp.

- Montreal Canadiens: Something about the blue with the Canadiens look grabs me. They've never really had anything that doesn't mainly feature their classic red jerseys, but this works and works well. We'll have to come back to this later when we see it on the ice.

The Canadiens' adidas #ReverseRetro jersey is inspired by the color that marked the team's first sweater in 1909.

- New York Rangers: The "Lady Liberty" jerseys are back, and they're just as good looking as they were from 1996 to 2007. Although the red trim is taken out of the sleeves, the logo itself is iconic in its own way.

- Vancouver Canucks: A lot of people are not big fans of the gradient looks with a jersey, but the Canucks' jerseys from 2001-06 just worked for me. These jerseys are no different. I may be in a small minority, but if you can make a gradient pattern work, by all means go with it.

- Boston Bruins: They're fine. Love the inclusion of the retro Bruins shoulder patch.

- Chicago Blackhawks: Like the retro crest logo, but the jersey otherwise is nothing to speak home about.

- Minnesota Wild: Love the inclusion of the Minnesota North Stars color scheme, but why not use their old logo? Completely missed the mark.

- New Jersey Devils: Love the Christmas look, but nothing too special.

- Pittsburgh Penguins: Something about the words of a city diagonal across the crest I like. Pretty sharp.

- St. Louis Blues: At first I wasn't a fan of these, but upon further review, this Blues look on a red jersey isn't that bad. They may not be as sharp as the 1995 jerseys, but still a decent look.

- Tampa Bay Lightning: Love the old Lightning logo, but really would've hit it out of the park with the storm jerseys from 1996-99.

- Columbus Blue Jackets: Original logo is classic, but not feeling the red jersey.

- Dallas Stars: Nothing really pops about this jersey. Plus, the white pants and gloves are going to be blinding.

- Florida Panthers: Almost looks like a Stadium Series jersey with the wrong gold color for the trim. Not a big fan.

- Nashville Predators: What, didn't want to bring back the mustard yellow look? Yes, they were terrible back then, but I'm down with that specific logo.

- Ottawa Senators: Just feels like the Senators came out with a third jersey. I love that they want back to the 2D look, though.

- Vegas Golden Knights: It's tough when Vegas is going off their look from the IHL days. Not a great look, but they're not the worst.

Tier 5: Not doing it, chief

- Detroit Red Wings: It's a white long-sleeve shirt with a Red Wings logo thrown on it? Snore.

- Edmonton Oilers: So, what's retro about this? Two thumbs down.

- Toronto Maple Leafs: Sure, why not bring back the worst logo in franchise history and blow it up to mega-size? Totally missed the mark on this one. 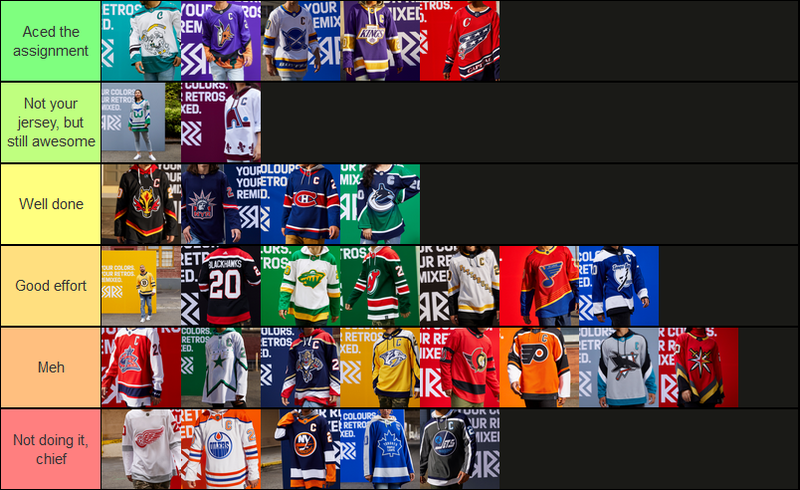