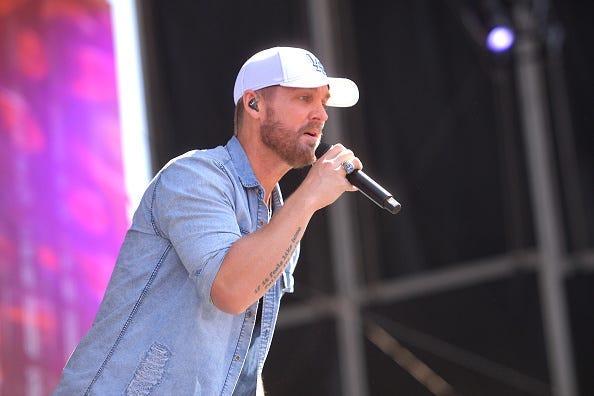 One good thing that's come out of the pandemic for Brett Young, who, like all musicians, has been forced to stop touring, is the additional, unexpected time at home with his family - especially with a young daughter.

“For everybody this is a weird year, and it’s frustrating and you want it to get back to normal," he sympathizes in a statement from his label. "[The] sad reality is probably the normal won’t look like it ever did before anyway.

"But I have gotten to see and hear a lot of 'firsts' with my daughter because during the summer fair and festival season when I would have been gone four days a week, I was home," he continues. "You know, I heard her say da-da for the first time. I was there for that. But there’s been a lot of things that I haven’t had to miss out on that I definitely would have missed out on if we were at normal capacity.

"And so, you’ve gotta kinda fight to look for the silver lining but there’s a handful of them if you’re willing to look for ‘em.”

music
The Reel Buzz: Netflix’s ‘Fate: The Winx Saga’ is your new YA fantasy binge
news
1 dead, 2 critical after bus heading to Grand Canyon rolls over
sports
Mark Schlereth: 'I don't care how many kneecaps you bite,' Lions not talented enough
news
Bob Evans recalls over 4,000 pounds of pork sausage due to possible contamination
news
How the Biden administration is tackling the coronavirus pandemic
news
Schumer says Trump impeachment trial to start week of February 8