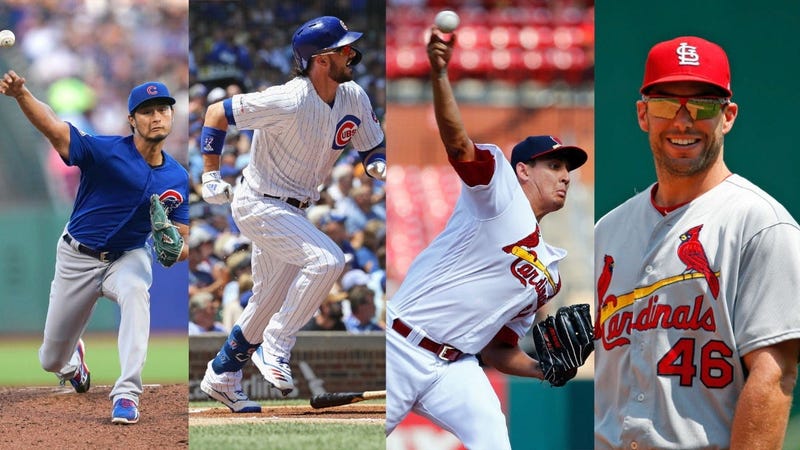 ST. LOUIS (KMOX) - The best rivalry in baseball gets even better when you take a glance at the standings – as the St. Louis Cardinals and Chicago Cubs are tied for first in the NL Central. They meet for a three-game series starting Tuesday night at Busch Stadium.

We took at look at the stats of both teams from just the month of July, to find the five hottest players on both sides:

Paul Goldschmidt - The reigning NL player of the week has homered in six of his last seven games. He's second in the NL with 10 home runs and his 13 extra base hits are tied for fourth-best.

Paul DeJong - He's pretty much the Paul Jr. in July. Although his five homers are half of Goldy's total for the month, that's still good enough for top-15 in the NL.

Kolten Wong - His glove work is always well noted and at the dish he's hitting .344, which is fifth best in the NL among players who have played in at least 20 games.

Giovanny Gallegos - In 11.2 innings has a 0.77 ERA. You won't see the 27-year-old in the 9th inning, but he will be guy entering the game in the seventh inning of a one-run game with runners in scoring position. And he'll likely pitch out of the jam.

John Brebbia - The Cardinals have won seven of the 10 games Brebbia appeared in this month. His 0.79 is second best best on the team.

Kyle Schwarber - The all-or-nothing outfielder is tied for seventh in the NL with six home runs this month. However, he's hitting just three points above the Mendoza line.

Javier Baez - His 12 extra base hits are tied for 9th best in the NL and matched Bryant's five homers.

Yu Darvish - Tuesday night's starter (vs Adam Wainwright) has a 2.92 ERA and struck out 27 in less than 25 innings this month. And he's gone at least six innings in every start this month.

Kyle Ryan - Oppoents are hitting .121 off the Cubs version of Gallegos. The lefty is going to get the heart of the Cards order at least once, maybe twice in this series.

As a team, here's how both sides look coming into the series: