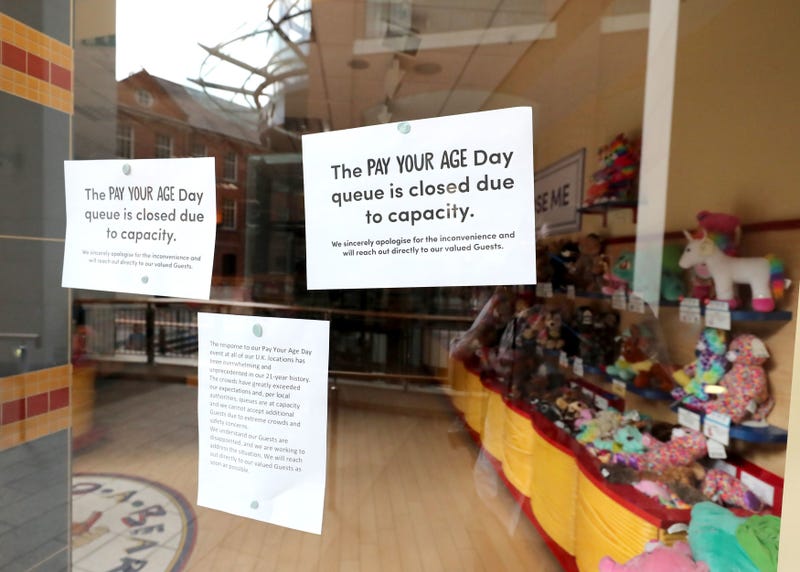 ST. LOUIS (KMOX) - The second ever "Pay Your Age" promotion by Build-a-Bear workshop is hopefully not going to end with overwhelmed stores, disgruntled customers getting turned away and safety concers at malls around the U.S.

Last year on July 12, the plush-toy sellers had to release a statement saying all U.S. Build-A-Bear stores "cannot accept additional Guests ... due to crowd and safety concerns." There were reports of families with young children waiting in line for up to seven hours to purchase a stuffed bear at a huge discount. The "Pay Your Age" sale was exactly as it sounds — if your child is 2, parents pay $2.

At the Saint Louis Galleria and West County Mall locations in the St. Louis area, some where waiting for hours in lines that stretched throughout the malls.

But this time it won't be a free-for-all, instead you'll have to be among the lucky 200,000 guests in the U.S., U.K. or Canada holding a winning ticket.

If interested, you'll need to register online by signing up for the Build-A-Bear Bonus Club rewards program between now and midnight on June 16. Those who get notifed they've received a winning tickets will be assigned a date range to visit their Build-A-Bear store: June 24-26 or June 26-28.

Here's what the promotion looked like last year in St. Louis and across the U.S.:

Several hundred people in long, winding line outside Build-A-Bear at Galleria. The wait is estimated to be 4 hours. pic.twitter.com/TD4f01nTRA

KMOX spoke to one woman who had been waiting in line with her young son since 9 a.m. and did not enter the store until 11:55 a.m. Another woman, who had been in line for about two-and-a-half hours, said she wasn't going home "until we get a bear."

She says those waiting were able to move out of the line to get a bite to eat, without losing their place.

Build-A-Bear is overwhelmed with customers they have cut the line off at Chandler Mall in Arizona they are asking people not to come... They have handed out $15 off dollar coupons. #12News #BuildABear #Longlines pic.twitter.com/aAptX3vbDt

Build-A-Bear Workshop's "Pay Your Age" promotion proved too popular. The chain couldn't handle the crowds and had to turn shoppers away https://t.co/Wn9yhuhiMx pic.twitter.com/JtT4FDc72r

The queue at build a bear . Livingston @buildabear . Right round the mall and outside pic.twitter.com/AFf93q8xvy