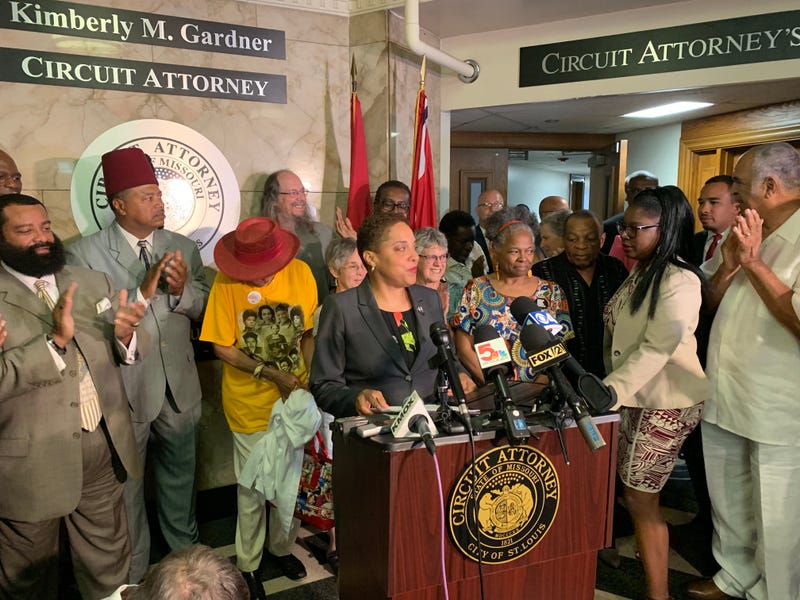 ST. LOUIS (KMOX) — Surrounded by supporters, embattled Circuit Attorney Kim Gardner held her first news conference since a grand jury disbanded without charging her in her handling of the Eric Greitens case.

"The grand jury expired and was disbanded without issuing an indictment against me," Gardner said, "I steadfastly maintain that all of my actions were both legal and ethical, pertaining to my investigation or my decision to charge the former governor," Gardner said.

Several weeks ago, the same grand jury indicted a member of Gardner's team during the Greitens case — former FBI investigator William Tisaby — accusing him of lying under oath during a deposition.

Tisaby's indictment accused Gardner of knowing he was lying under oath, but doing nothing to correct him. But the grand jury, which ran out of time last Friday, went home without issuing any charges against Gardner.

Opening her news conference, Gardner said she would not take any questions on the Tisaby case, because it's pending litigation.

Gardner was asked if she had testified before the grand jury. She refused to answer that question before reporters.

She also declined to say whether she believes the cloud has lifted, or whether the special prosecutor could seat another grand jury to consider evidence against her.

In her prepared remarks, Gardner said it's unfair to judge her administration based on just the Greitens case, and not consider her overall record of reforms. She stressed the importance of her diversion program, which has sought to identify nonviolent offenders and give them drug treatment and job training as an alternative to prison.