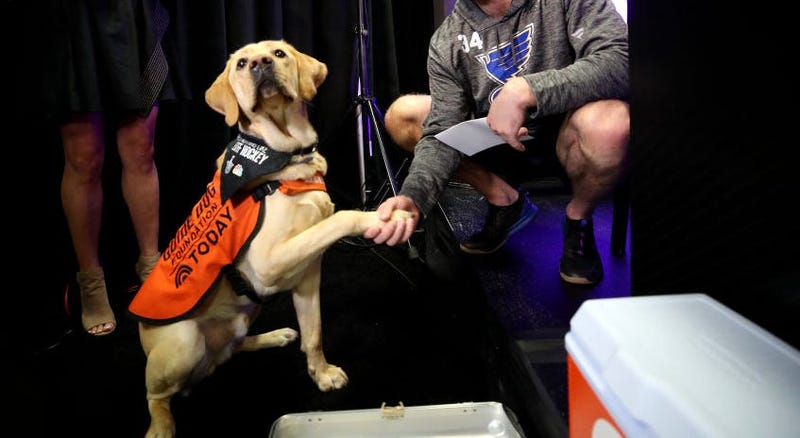 ST. LOUIS (KMOX) - For the second year in a row, Barclay the Dog will lead the way through the streets of Soulard for the 27th-annual Purina Pet Parade taking place Sunday, Feb. 16. The assistance- dog-in-training being raised by the 2019 Stanley Cup Champion St. Louis Blues will serve as a Grand Marshal along with St. Louis Blues legend Bob Plager and veteran KSDK broadcaster and longtime pet advocate Kelly Jackson.

Stanley Pup Champion! -- Thanks to our friends at @purina, Barclay now has his own championship collar from @jostensinc!

“Barclay and the St. Louis Blues had an incredible 2019, and we can’t think of more fitting role for the Stanley Pup Champion than to lead the way for the 2020 Purina Pet Parade along with his teammate Bobby Plager,” said Daniel Koehler, Lead Community Affairs Specialist at Purina. “When it comes to champions for local pets and pet-related causes, Kelly Jackson is at the top of the list. She’s an amazing advocate and voice for the pets of St. Louis.”

Pet owners and their costumed pets can march in the parade for a donation of $10 per pet, with all proceeds benefitting Open Door Animal Sanctuary. Registration is now open at PurinaPetParade.com and will be available on-site the morning of the parade beginning at 10 a.m. at 12th Street and Allen Avenue.

It me! On a calendar! Every month! ••• 2020 Barclay calendars, sponsored by @PetSmart, will be available starting at Barkin' for the Blues night (Dec. 12) at all team store locations within Enterprise Center. They will be $10 each and calendar proceeds benefit @duodogsinc. Availability is limited!

The parade steps off at 1 p.m. at 12th and Allen Street and proceeds throughout the streets of Soulard, ultimately ending at Soulard Market Park. There is no charge to attend the parade as a spectator.

As in previous years, the annual Pardi Paws pet photo costume contest will take place online through the support of the St. Louis Post-Dispatch. The contest is open to pets in attendance at the event in Soulard, as well as those choosing to stay home and party in the living room.