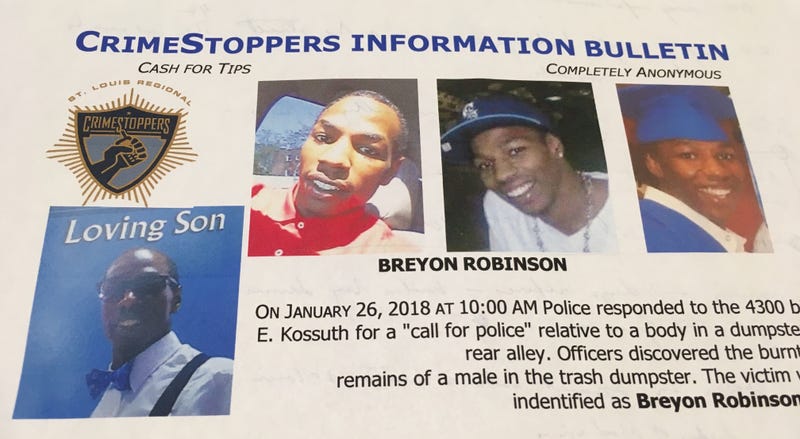 ST. LOUIS (KMOX) - Reward fliers are going up to help solve the January 2018 murder of a man whose burned body was found in an alley dumpster in the Penrose neighborhood of north St. Louis.

Breyon Robinson was 29 and a family member says he was last known to be in Spanish Lake a few days before he disappeared.

Lisa Pisciotta of CrimeStoppers says the reward is $5,000 in the case and she says even if you just have "the word on the street" to share, it could help.

And she says if any tip leads to an arrest, they will pay out the reward. Anyone with information is asked to call CrimeStoppers at 866-371-TIPS. (8477).

KMOV reported last September that a detective had told the victim's family that police knew who killed their son, but couldn't make an arrest because of staffing shortages and distrust between police and the Circuit Attorney's office.

At the time the Circuit Attorney's office issued a statement saying: "It’s tragic that certain members of the police department are putting politics above public safety. Families and victims of violent crime deserve better."