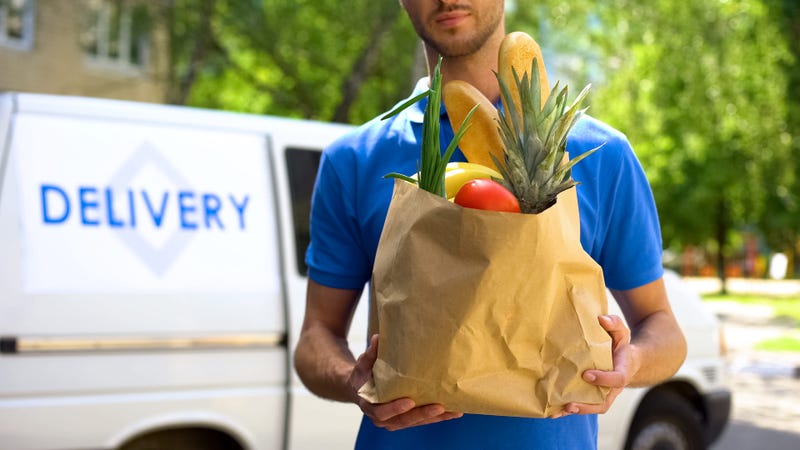 ST. LOUIS (KMOX) -- When I first started delivering food as a "side hustle" with Postmates in April 2016, my bosses at KMOX and I decided that I wouldn't cover anything related to this industry -- ride sharing, food delivery, doing random tasks for people they don't want to do themselves -- considering it would be a conflict of interest.

We've suspended that for the time being given everything that's happened so far related to this coronavirus pandemic, and everything that could still be on the horizon.

I'm here to give some inside details on how food delivery in St. Louis works on various platforms -- GrubHub and DoorDash are the ones I know best, so that's where I'll focus.

So -- with that said: restaurants are in a huge pinch. I started writing this column after Illinois mandated all dining rooms close. I predicted Missouri would soon follow and then, sure enough, St. Louis City and County plus St. Charles and Franklin Counties followed suit Tuesday. Some are staying open only to serve delivery or carry out customers which is commendable -- and it's important their food gets to the people who want it.

Now -- how do you ensure your order gets to you on time or, in some cases, at all? It, for better or worse, comes down to how generous you are.

On GrubHub and DoorDash, we're able to see whether you've left a tip before we accept the order. We can't see what exactly you tipped, but we see the total amount we'll be paid for the order and are able to guess within a general range.On other platforms like Postmates and UberEats, customers tip after the order is finished. Some say this is the way it should be done, but eventually I had to stop working on those platforms because 3/4 customers didn't tip at all. It stopped being worth my time. So if Postmates or UberEats are your preferred platforms (why shouldn't they be? They're user friendly and usually have pretty good deals), make sure you keep the app open and tip your driver.Here's the best way to think about it: what would it take for you to deliver someone's meal? What amount would make it worth it to you?

For me, if you don't leave a tip on the app, I will not accept your order. Once I reject it will be offered to the next available driver. At times when it's very busy, or at times when there aren't many drivers on the road (think snowstorms or pandemics), your order could get knocked around for a while.Some people prefer to tip cash and that's fine -- but just be aware that, in my experience, 90% of the people who leave no tip in the app aren't giving you a cash tip at the door. So while your intentions may be good, you're lumped in with a bunch of others whose intentions aren't. Some drivers also don't like carrying cash because of some of the neighborhoods we go into.

GrubHub and DoorDash typically pay the driver $3 to get the order. It varies from order to order and there's no rhyme or reason for why the payout at some restaurants is more than others, but it's generally safe to assume that $3 is the base.

It usually takes me 25-30 minutes to complete one order. 10 minutes to the restaurant, 5 minutes waiting for the food, 10 minutes to your home. If I do two of those orders without a tip, in one hour I will have made between 6 and 8 dollars. That's 6 to 8 dollars an hour (taxed) to drive my own car around and spend my own gas money during a pandemic. It's not worth it to me, but when ordering ask yourself -- would that be worth it to you? If it isn't, consider what you would want and then act accordingly.How much should you tip? Obviously that's up to you, but keep in mind your driver is putting themselves at a considerable risk by being out amongst the general public. For most people, driving from downtown St. Louis to the Taco Bell at Kingshighway and Natural Bridge for delivery to Jennings... for $4... isn't worth it (this is an example of an offer I got Tuesday. I rejected it). A good rule of thumb that GrubHub offers for tipping, on its own website, is a flat $5. If it's a larger order, tip a little more. If we're in a snowstorm, it's raining or we're staying at home for weeks at a time due to a pandemic, tip a little more.This isn't foolproof. Three weeks ago I tipped according to my own standards, but after two hours a driver hadn't been assigned to my order and I just ended up canceling the whole thing. Sometimes that happens and it's unavoidable. But this gives you a better chance than most and, for what it's worth, I've never had trouble getting a refund from any of these services.One thing I did not anticipate was how quickly this line of work would dry up. Just last Saturday, GrubHub had about 60 shifts open during dinner. This week there are no shifts available at all on any day. This is because people are out of work and they're starting to do what they have to do to make ends meet.

Another tip: call ahead. Even though the point of the apps is to order without talking to anyone, call to make sure the restaurant is open -- especially if we're under an order that all restaurants and bars close their dining rooms. Restaurants are notorious for leaving their tablets on without informing the delivery platform they're closed. I don't want you waiting around for an hour only to find out your food isn't coming.

I only say this out of, again, experience: some restaurants closed the last time we got two inches of snow, and I remember one Christmas Eve a few years ago where a lot of restaurants were available on GrubHub -- but I couldn't actually order from any of them because they didn't turn off their tablet.Something I've wrestled with in recent days is whether people will see delivery during this pandemic as a viable option. After all, you don't know your driver, you don't know where their hands have been. I can't speak for everyone, but I have a bottle of hand sanitizer in my car that I apply at least every 30 minutes. I wash my hands every time I'm in a restaurant. I take hygiene pretty seriously given that I actually worked in a restaurant for ten years, and I've been spending the last four years helping local restaurants expand their reach by delivering their food to people across the St. Louis area. I wouldn't knowingly do anything to jeopardize your health or your family's health, and I'm going to take every precaution I can.

During these uncertain times, I'm hoping at least one stable will remain: ordering takeout. The number of people depending on this -- both the restaurant industry and the third party independent contractors who deliver their food -- is growing, and I hope we're able to help restaurants and delivery drivers through these challenges.But whether you're ordering through an app or getting curbside pickup from your favorite neighborhood spot... tip a little extra. Help them out. An extra dollar or two won't break the bank for you, but it makes a huge difference to them.Alex Degman is a news anchor and reporter for KMOX. He's been moonlighting as a delivery driver since April 2016 for Postmates, Uber, UberEats, GrubHub and DoorDash because he spends more money than he makes and has ridiculous ideas about future investments.The opinions expressed are solely those of the author and do not reflect the views of management and staff at KMOX, Entercom St. Louis, Entercom Communications or any of the companies mentioned in this column.