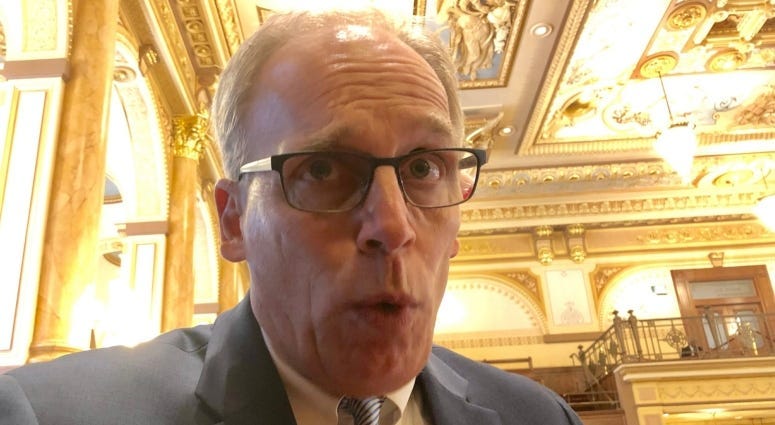 SPRINGFIELD, Ill. (AP) — Gov. J.B. Pritzker said Wednesday he is confident that Illinois residents will swallow $1.8 billion in new and increased taxes to pay for a massive state construction program , while a key Republican said some of the taxes aren’t acceptable and lawmakers may have to seek revenue from expanded casino gambling to finance the program.

The Democratic governor told reporters that the need for his six-year, $41.5 billion plan to build and repair roads, bridges, schools, parks and more is so apparent that taxpayers understand his proposals to double gas taxes and vehicle registration fees and suggested new taxes on video entertainment services and ride-sharing.

“There are bridges and roads and highways and waterways that are falling apart .... We need to advance the economic interests of the state,” Pritzker said. “We’ve got a lot of work to do here. And I think everybody understands that.”

But Rockford Republican Sen. Dave Syverson, the assistant Senate minority leader, said many of the new taxes are too contentious to win approval. The longtime gambling proponent predicted that unless a proposed expansion of casino wagering is revived for its revenue-producing potential — likely as part of brewing sports-betting legalization — a capital-construction program won’t be approved before the General Assembly’s scheduled May 31 adjournment.

Pritzker’s plan would raise $1 billion annually alone from increasing the motor fuel tax from 19 cents to 38 cents per gallon, and bumping the $100-a-year vehicle registration fee to $199 for cars less than three years old, with a sliding scale for older ones. Other big revenue producers are stickier, including a $1-per-ride statewide tax on each trip from a ride-share service, producing $214 million, and $150 million from a new, 7% tax on cable, satellite and streaming video services.

Such a far-reaching plan is a liability for a governor whose critics have already attempted to label him as promoting numerous tax increases with his proposal to revamp the state’s income-tax structure to a graduated scale, taking a deeper dip from the wealthy. Republicans call it a tax increase because it would raise $3 billion extra per year, although Pritzker contends that 97 percent of Illinois residents would pay the same or less.

While new money from an overhauled income tax program would go toward Pritzker’s promises such as paying off billions of dollars of state debt and stabilizing the bottom line, supporters say that taxes for a capital-construction program would produce much more visible results, making it an easier sell.

“We fixed this road, we finally repaired the leaky roof in this school, we were able to take the mold out of a dorm at one of our public universities. These are important things,” said House Majority Leader Greg Harris, a Chicago Democrat. “This isn’t a Republican or Democrat issue. We’re working together on solving it.”

Pritzker pledged Wednesday that he’s committed to a public works program that features “vertical” projects, such as schools, sewer plants and recreational facilities, as well as “horizontal” roads, bridges, rail and mass transit. But Syverson, noted that vertical-work financing relies on proposed taxes such as ride-share and streaming which Syverson sees as too contentious.

“Some of those may make sense and could maybe be passed, but not all of those, so if half of those don’t get passed, then the program’s not going to work,” said Syverson, who added that riverboat-casino tax revenue played prominently in that role in 1999 and 2009 capital programs.

Casino expansion, Syverson said, could boost gambling revenue by $350 million a year. He said a casino plan could be part of a larger legislative initiative in the House to legalize sports betting, or it could stand alone.

“Without getting that done, there won’t be a capital plan, at least in the next two weeks.”