The Los Angeles Dodgers and Atlanta Braves kicked off the NLCS with 11,500 fans in attendance, much to the excitement of many players and, obviously, of those fans.

Braves outfielder Ronald Acuna Jr. is one of those players, as he said that he's "overwhelmed with joy" that fans could come back to the stands and support their favorite teams as the playoff race comes to a close (via Jeff Passan of ESPN).

However, there are many who are rubbed the wrong way by the idea of having fans in a bubble setting while the coronavirus pandemic continues to disrupt society and the purpose of the bubble is to prevent outbreaks, such as those that are hindering the NFL season, from occurring.

Count Cardinals ace Jack Flaherty as one of the skeptics -- at least that's how it seems from his tweet on Monday night.

in a bubble with fans

The NBA allowed fans to attend playoff games within the Orlando bubble, though those fans could only be family members and "established long standing personal friends." That's not quite the same deal as with MLB, as 11,500 fans were allowed to purchase tickets -- the same amount that eventually attended Game 1 of the NLCS, according to Ryan Spaeder -- and they didn't need to check off the "established long standing personal friend" box.

However, 11,500 fans is obviously not the amount of fans that would be in attendance for a playoff game that wasn't taking place during a worldwide health emergency. The protocols that are seen everywhere still apply, as masks need to be worn and social distance needs to be kept. Zip ties are being used to close up seats that should not be used in order to keep groups of fans distanced from others (via Passan).

MLB joins the NFL, college football and other sports in allowing a significant number of fans to attend games, though there are significantly fewer restrictions in some arenas for other sports. For instance, a Miami Dolphins game sometime this season could foreseeably hold full capacity. 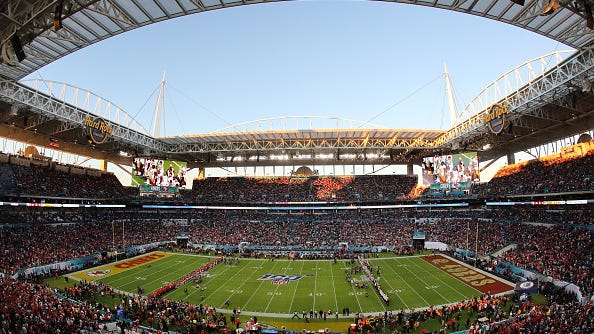