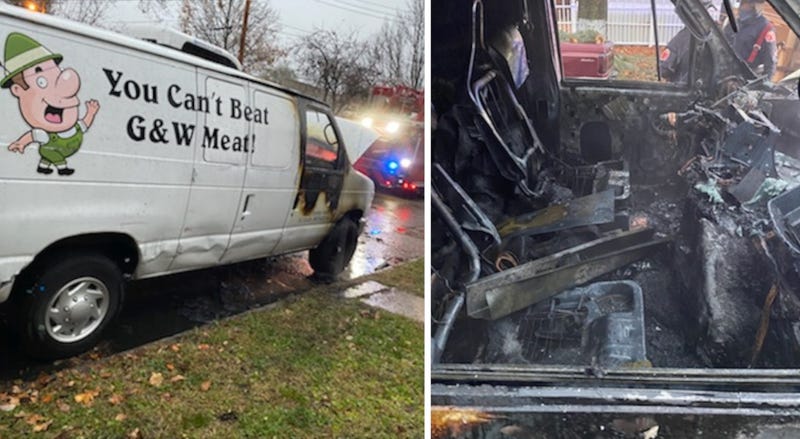 ST. LOUIS (KMOX) - The owner of a sausage company in St. Louis says this crime couldn't have come at a worse time for them. Their only refrigerated delivery van was stolen, used to commit a crime and then set on fire over the weekend.

Bob Wanninger of the G&W Meat and Sausage Company says they got a call from the St. Louis Fire Department on Saturday morning that one of their vans was found after it had been torched. Wanninger says at that point they didn't even realize it had been missing.

He says the van was taken from their lot in the Tower Grove South neighborhood in the early morning hours on Saturday, then used to steal a Harley Davidson motorcycle from a home in the city of St. Louis. The van was then left on the side of South Broadway with the inside burnt to a crisp.

G&W’s delivery van was stolen Friday night after midnight and then set on fire by the thieves after they apparently used...

Wanninger says the owner of the Harley Davidson believed it was someone who worked for G&W that carried out the theft, since he saw the company's name and phone number on the van that stole his bike. Wanninger assures they had nothing to do with it.

They only information they have on the people who did this were that it was two white males. Wanninger says he's hoping someone saw the van possibly stop at a gas station or drive through somewhere that the culprits can be identified.

"This happened during the busiest time of the year for us," Wanninger says. "Now we’ve got to buy another van, get it insulated and put a refrigerator unit on it."

He says they're expecting a lot of business since it's the start of deer hunting season and they'll have a lot of deer meat to process. They have a special offer right now and are donating some funds to support BackStoppers for each full deer they process this season.

Wanninger asks if you have any information to call them or the St. Louis Metropolitan Police Department.