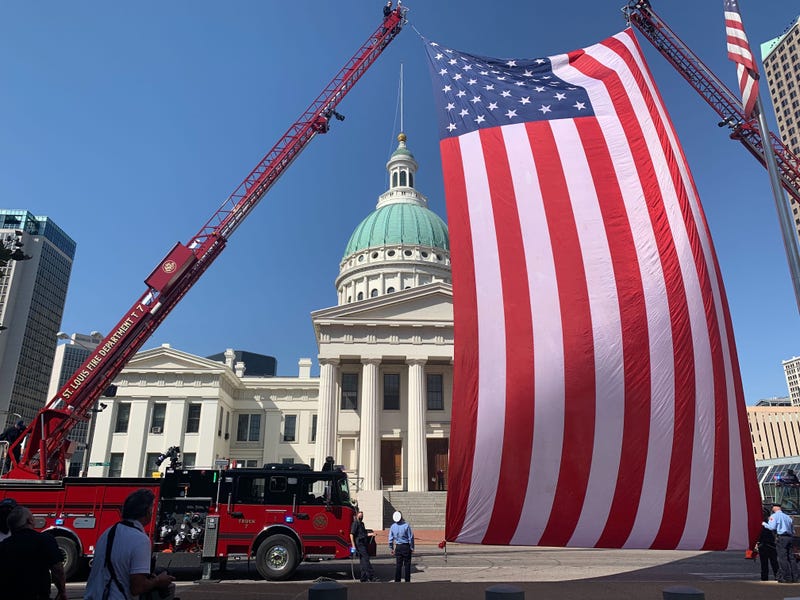 ST. LOUIS (KMOX) - A giant American flag dangled between the outstretched ladders of two St. Louis fire trucks and flew in the breeze outside the Old Court House looking toward the Gateway Arch on Wednesday. It's a tribute flag, being shown in cities around the world to honor those who gave their lives for freedom.

San Diego Firefighter Mitch Mendler has been organizing the tribute since 2016. The 50-pound, 60-foot long flag has made it to more than 40 U.S. capital cities and numerous landmarks.

"This is the flag of our country, the red, white and blue," Mendler says. "My father went to World War II and sacrificed just like many other guys and ultimately what happened is they preserved freedom.

"1.3 million men and woman gave their life for the red, white and blue, and we just want to respect that."

The flag has even flow outside the U.S., as Mendler says the most positive outpouring of support for the American tribute flag came on a recent D-Day anniversary in Normandy, France.

Mostly he says the response has been positive, but he admits concerns about possible anti-flag demonstrations, so he doesn't announce ahead of time where the flag is going next.

According to Mendler's website, the flag is shipped by FedEx at no cost. He posts photos of every stop the flag has made.