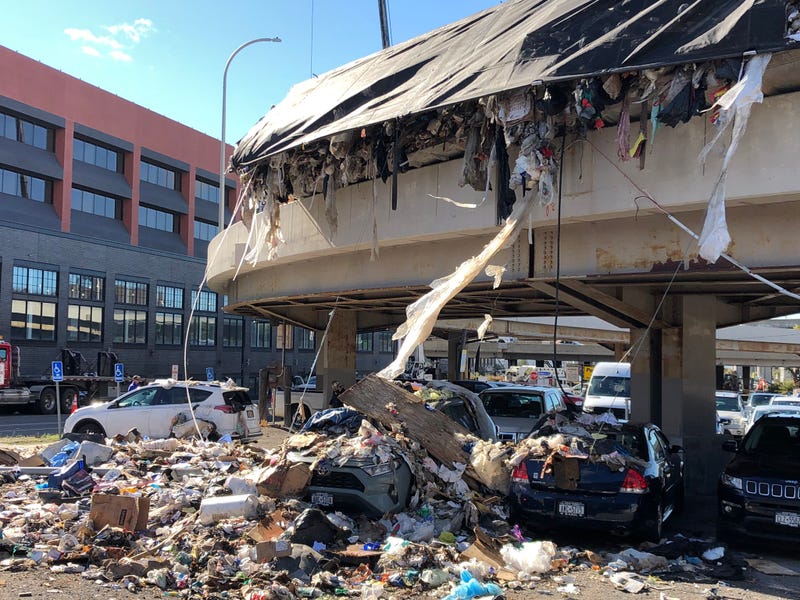 Buffalo, NY (WBEN) - An overturned garbage truck on the ramp from the Skyway to the 190 North over Pearl Street created a smelly situation downtown.

The accident happened after 9:00 Thursday morning, and created one of the most memorable images of the year so far:

It reeks over here. Here’s the garbage truck that overturned going from the Skyway to 190-N ramp pic.twitter.com/AQVeSBsWlp

Nobody was hurt in the incident and Buffalo Fire Department Batallion Chief Tom Meldrum tells WBEN, "Clean up is going to take a while."

There were also no hazardous materials in the garbage truck. The cause of the accident is still under investigation.

Jessica Aebischer was among the several cars that were parked in the lot underneath the on-ramp. Her car, which she said she bought a year ago, has a shattered back window and there are concerns she won't be able to get it on the road.

"I was at work and went on break and saw I had a missed call," Aebischer said. "I checked my voicemail and it was the police department telling me it was in the parking lot that was just damaged. I came down here to see what happened and I came to all of this debris and my car damaged."

She did say though there is a little bit of humor in it, but she's mostly upset.

Allpro parking owns the lot. Aebischer said they've been in contact with her.