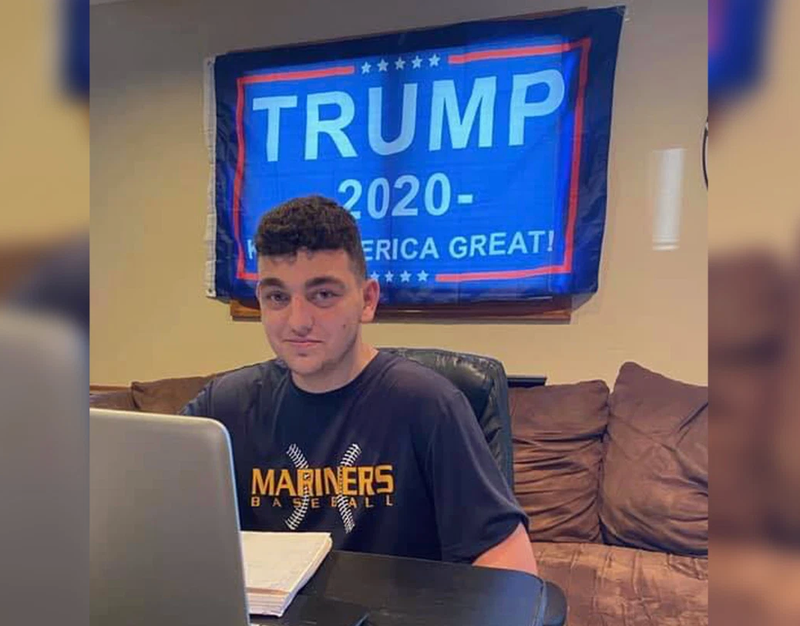 A New Jersey teen claims he was "clicked" out of his remote learning chemistry class over a Trump 2020 banner that he refused to take down.

According to Anthony Ribeiro, a 17-year-old junior at Toms River High School North, his chemistry teacher Andrew Gilman gave him an ultimatum during a virtual session last Thursday after spotting the "Trump 2020, Keep America Great" sign that hung behind him.

"I was the only person in class," the Asbury Park Press reported. "He looked up but didn’t say anything. Then when he was taking attendance, he came to my name and there were at least 16 to 20 people on and he said, ‘Anthony, take the sign down right now, there is no room for politics in my classroom.'"

Ribeiro ignored Gilman’s demand, shaking his head to indicate that he wasn’t going to comply.

Gilman then warned Ribeiro again adding "If you’re not going to get up and take it down, I’m going to have to ask you to leave the class for today,"

Ribeiro, an honor student said he then waved goodbye and was gone.

The incident shocked Tara Jost, the teen's mom, who told NBC New York, "I couldn’t believe that a teacher would ask my son to take down something that was in my home."

Jost called the school and spoke to the school's vice principal who said that the teacher had been mistaken.

Ribeiro added that he kept the banner up during Gilman’s class on Friday and no comment was made by the teacher.

The same day during Ribeiro’s English class, his teacher Leslie Maryon-Larose asked him to remove the banner, calling it a potential disruption.

The teen agreed, adding that he felt his grade might suffer if he did not.

According to a a statement from district officials, the matter was being handled internally.

"The student was not in violation of any general code of conduct or any policy specifically related to virtual learning," the statement said. "We have worked with and are continuing to work with all involved parties to resolve the issue and move forward.

Ribeiro’s mother is seeking an apology from Gilman for kicking out the honor roll student out of his chemistry class.

The banner was a birthday present for Ribeiro from his aunt the JerseyShoreOnline.com reported.