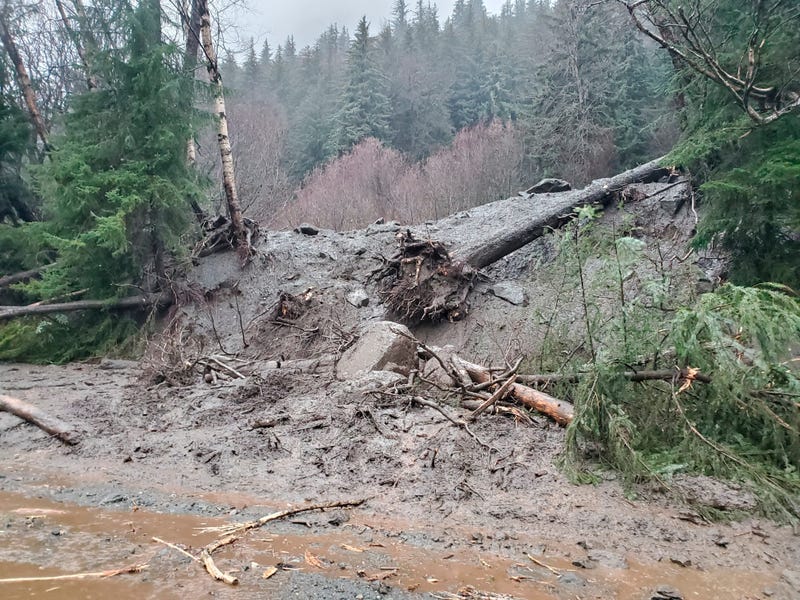 Photo credit This photo provided by the Alaska Department of Transportation and Public Facilities shows damage from heavy rains and a mudslide 600 feet wide in Haines, Alaska, on Wednesday, Dec. 2, 2020. Authorities say six people are unaccounted for, and four homes were destroyed in the slide, with the search resuming Thursday morning for survivors. (Matt Boron/Alaska Department of Transportation and Public Facilities via AP)
By The Associated Press

JUNEAU, Alaska (AP) — A local economic development official and a woman who rents an apartment from him have been identified as the two people missing after a landslide as wide as two football fields slammed into a neighborhood in Haines, Alaska, the mayor said Thursday.

The home of David Simmons, interim executive director of the Haines Economic Development Corp., was among the four houses destroyed when the landslide came down Wednesday, Haines Borough Mayor Douglas Olerud said. Jenae Larson was renting an apartment above Simmons' garage, he said.

The search for survivors was suspended Wednesday night because of unstable ground in the slide area.

There were numerous smaller slides in the community of about 2,500 people as heavy rains battered much of southeast Alaska.

The National Weather Service said Haines received up to 10 inches (25 centimeters) of rain in the last two days. Jeremy Zidek, a spokesperson for the Alaska Division of Emergency Management and Homeland Security, said 12 of the 30 communities they contacted in southeast Alaska reported some type of damage from the storm, ranging from dangerous mudslides to flooded basements.

Rescue crews from Juneau traveled about 100 miles (161 km) north to Haines on Thursday morning, and others were expected throughout the day, troopers said.

The ground remained unstable, and crews were trying to assess the area “while still protecting everybody, and so we don’t have a bigger incident than we currently have,” Olerud said.

He said while it was not raining Thursday, the ground remained water logged and the potential for additional slides existed.

“We’re hoping we don’t have any seismic activity while we have this loaded, wet ground,” the mayor said.

State officials have sent equipment and personnel to assist. That includes state geologists, who will assess other areas that might be prone to slides “and hopefully find out if we need to evacuate people proactively rather than reactively,” Olerud said.

The city has requested additional help to support mental health and counseling.

“Our local staff for that is already overwhelmed with COVID this year, and so now taking care of this event, it’s putting a strain on them,” he said.

Simmons' position with the economic development group was announced Aug. 7 in a statement. It said he holds a master’s degree in International Business Studies from the University of Erlangen-Nuremberg in Germany and participated in an educational exchange with the U.S. Embassy in Minsk, Belarus.

He started his own transportation service in 2017 between Haines and Whitehorse, Yukon Territory. He was inspired when he had difficulty making the 245-mile (394-kilometer) journey himself to Whitehorse, where he could catch a direct flight to Germany, Haines public radio station KHNS reported in 2018.

Several fundraising campaigns to assist those affected by the landslides have been created, including one from the Central Council of Tlingit and Haida Indian Tribes, working with the Chilkoot Indian Association.

Rebecca Kameika lives on Beach Road, though closer to Haines than where the slide hit. She said slides and related road damage had left some neighborhoods inaccessible.

She and her boyfriend were staying at his place of work; they were fine and expected their home to be, too, but evacuated as a precaution, she said.

The incident is devastating for the community, said Kameika, who set up a fundraising account and plans to work with another group to make sure the money is distributed fairly and where it’s needed.

Haines resident Luke Williams said the community is coming together. This rainstorm has been the “worst I have ever seen,” he said, adding he’s lived in the area throughout his 39 years.

“That’s the one thing special about this small town. Everyone comes together no matter how mad one person is at another. In the end if there is an emergency we all come together to help each other,” he said.

Besides assistance from the Alaska National Guard and a mountain rescue group in Juneau, the Coast Guard was deploying resources from several other southeast Alaska ports to assist.

“We’re extremely thankful for all the assistance we’ve gotten from the state of Alaska, some surrounding communities and anybody that wants to continue sending prayers to us, they are greatly appreciated,” Olerud said.