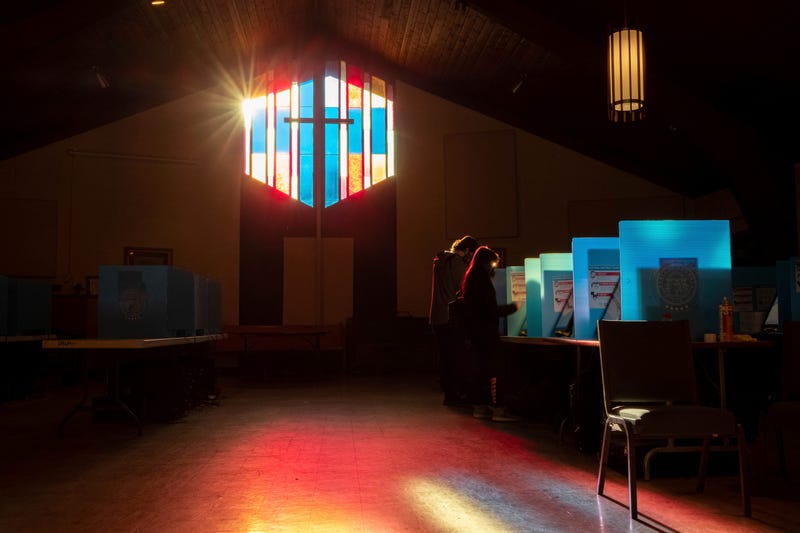 ATLANTA (AP) — Ballots are still being counted in the Georgia runoffs that will determine control of the U.S. Senate and the scope of President-elect Joe Biden's agenda. Tuesday’s vote also offers the first clues about the direction of American politics after the turbulent presidency of Donald Trump.

Republicans David Perdue and Sen. Kelly Loeffler are trying to hold off strong challenges from their respective Democratic opponents, Jon Ossoff and Raphael Warnock, in a race where half a billion dollars was spent to shape the outcome.

Here are some early takeaways:

Trump may have lost the presidency but his campaign to undermine the legitimacy of the election clearly succeeded with Republican voters in Georgia.

About three-quarters of voters who backed Perdue and Loeffler told the AP VoteCast survey that Biden was not legitimately elected in November. AP VoteCast interviewed more than 3,600 voters to measure the electorate’s views on a range of topics.

That sentiment clearly tracks Trump’s false rhetoric about election fraud, a claim that has been rejected by Attorney General William Barr, dozens of federal courts and several prominent Republican senators. And the findings clearly demonstrate Trump's continued hold on the Republican base, something his fellow GOP politicians will contend with even after he leaves office.

TRUMP STILL A TURNOUT DRIVER -- FOR BOTH SIDES

Even though it carried risk, Perdue, who is trying to win a second term after his first one expired Sunday, and Loeffler, an appointed senator trying to win her first election, tethered themselves to Trump every step of the campaign.

Democrats were running stronger in the early voting than they did in November, and that had Republicans nervous. Those worries followed weeks of Trump railing that Biden stole the election, spurring GOP fears that he’d drive some of his loyalists to skip the runoff out of protest while also repelling moderate and GOP-leaning independents in urban and suburban areas.

But, as it goes in the era of Trump, Democratic turnout appeared to stay strong as well. Officials in Fulton County, the most populous in the state and home to Atlanta, said Election Day turnout there exceeded what it was in November. Turnout among Black voters, who trend overwhelmingly Democratic, was particularly strong statewide. That adds up to a steep climb for Republicans. RELATIVELY SMOOTH SO FAR

Even with Trump's steady drumbeat of falsehoods about the voting process, state elections authorities and officials from both parties said Tuesday’s voting and the count appeared smooth.

A few precincts had extended hours but there were no reports of hours-long lines or precincts that ran out of provisional paper ballots. Elections officials also took advantage of rules changes since November that allowed advance processing of absentee ballots — so they can be counted more quickly.

That doesn’t mean the count won’t last into Wednesday or beyond, but for now, Georgia officials seemed to be managing the process without major issues.

The four candidates ran essentially as two teams, a reflection of the national stakes. But there was always the possibility of a split result — most likely driven by a slice of voters who might vote in just one of the two races.

Republicans need just one Georgia win for a majority in Washington. Democrats need both seats.

Whatever the final outcomes, the prospects of such a close election almost certainly won’t discourage Republicans from continuing to model their appeals after Trump. Maybe not the wholesale embrace that Perdue and Loeffler used, but certainly not a full-scale retreat.

Trump has clearly relished his iron grip on the party even after he lost his own reelection bid. He’s still the president who drew thousands to rallies where attendees were more enamored with him than with either Georgia senator, and those crowds reflect the core of the Republican primary electorate that chooses nominees.

Because of Democrats’ strength in metro Atlanta, Trump's appeal ultimately could fall short — but it’s also what overwhelmed Democratic Senate challengers in several other hotly contested races around the country in November, putting the GOP in position to defend a majority that many observers thought was lost heading into November.

Trump endorsed Georgia’s Republican Gov. Brian Kemp during a contentious GOP primary in 2018, only to call him “incompetent” and promise to campaign against him in 2022 because he didn’t heed Trump’s demands to reverse the Georgia presidential election results.

According to AP VoteCast, Republican voters are siding with Trump.

About 6 in 10 Republican voters approve of Kemp’s handling of the election aftermath. In November, AP VoteCast found about 9 in 10 Trump backers approved of Kemp’s overall job performance.

Kemp already was facing the prospect of a strong general election challenge from Democrat Stacey Abrams, who is expected to seek a rematch from her 2018 loss. She would come into the race with a boost from all her voter registration work that paid off with Biden's win and competitive Senate races. But for Kemp, it now appears he has to shore up his standing in his own party before thinking about a general election.

Democrats seem to have had a broader reach than Republicans in contacting voters. About 6 in 10 voters say they were contacted on behalf of Democratic candidates, compared with about half for Republican candidates.

Democrats’ ground game may have helped them turn out voters. Overall, about 4 in 10 said they were contacted and responded with a pledge or commitment to vote. These voters were more likely to favor Ossoff and Warnock than Perdue and Loeffler.

AP VoteCast showed signs that newcomers to Georgia were more Democratic than longtime residents of the state. Those who have lived in the state for longer than 20 years leaned Republican, while those who have moved more recently favored Democrats.