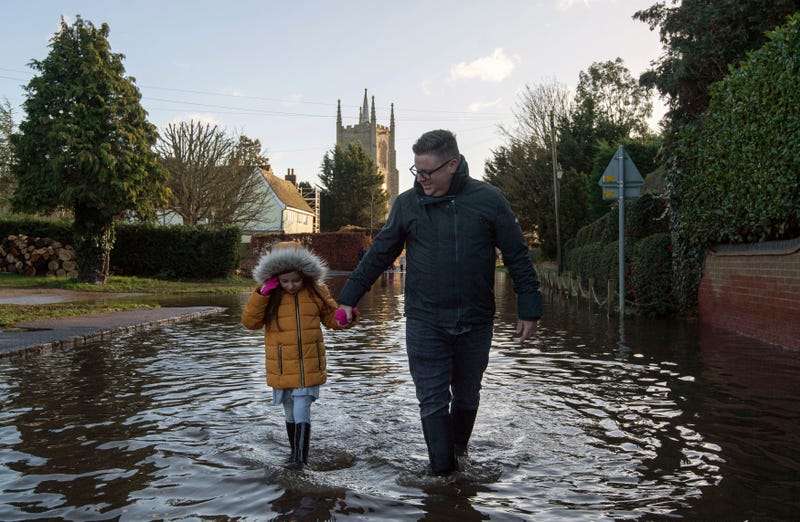 Photo credit A man and girl walk through the flood water, in Great Barford, in Bedfordshire, England, Sunday, Dec. 27, 2020. Hurricane-force winds reaching up to 106 miles per hour  (170 kph) and rainstorms battered parts of Britain, disrupting train services and stranding drivers in floodwaters. The Isle of Wight saw Storm Bella’s strongest winds at 106mph, while parts of the south coast of England and north Wales also saw gusts of around 80mph (129 kph). (Joe Giddens/PA via AP)
By The Associated Press

The Isle of Wight saw Storm Bella’s strongest gusts hit 106 mph, while parts of the south coast of England and north Wales also saw gusts of around 80 mph (129 kph). Flooding on the tracks caused train cancellations and delays in southern England, and a main train line into London was blocked by a fallen tree.

In Wales, Western Power said the storm caused power cuts for 21,000 homes. Most of the services were restored Sunday but 1,700 homes still had no power supply.

Some 1,000 people had to be evacuated from a flooded caravan park in Northampton on Christmas Day as heavy rain flooded the site. Severe flood warnings indicating a potential threat to life remain in the area.