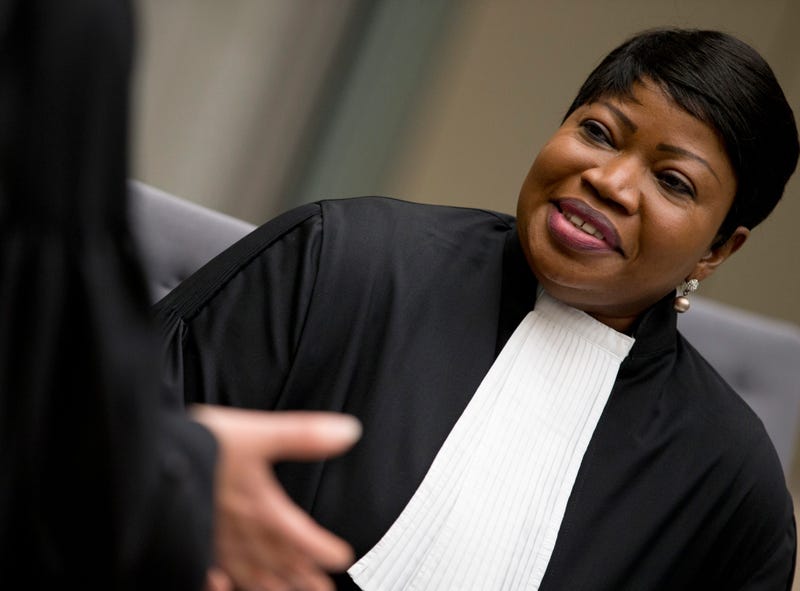 Photo credit FILE- In this Wednesday, April 4, 2018 file photo, chief prosecutor Fatou Bensouda waits at the International Criminal Court in The Hague, Netherlands. The outgoing prosecutor of the International Criminal Court hit out Monday at sanctions slapped on her by the Trump Adminstration in her last speech to an annual gathering of the court's member states before she leaves office next year. (AP Photo/Peter Dejong, FILE)
By The Associated Press

THE HAGUE, Netherlands (AP) — The outgoing prosecutor of the International Criminal Court hit out Monday at sanctions slapped on her by the Trump Administration in her final speech to an annual gathering of the court's member states before she leaves office next year.

Fatou Bensouda noted at the start of her speech to the Assembly of States Parties that the court and her prosecution office were “subjected to unprecedented and wholly unacceptable threats, attacks and sanctions this past year.”

In September, Secretary of State Mike Pompeo announced a freeze on assets held in the U.S. or subject to U.S. law by Bensouda and the court’s head of jurisdiction, Phakiso Mochochoko. Earlier in the year, the U.S. slapped a travel ban on Bensouda and other court officials investigating American troops and intelligence officials and those of allied nations, including Israel, for possible war crimes in Afghanistan and elsewhere.

Bensouda said that the measures were an attack on the court and its member states and represented “a dangerous precedent for a rule-based international system."

She said: "It is my sincere hope that the U.S. reverses its aggressive policy of antagonism towards the court. No one wins from such attacks.”

It is not yet clear how the vexed relationship between the U.S. and the global court will change when President-elect Joe Biden takes office next year.

Washington has long been wary of the court and the reach of its power. Former U.S. President Bill Clinton signed the Rome Statute treaty that established the court on Dec. 31, 2000, but President George W. Bush renounced the signature, citing fears that Americans would be unfairly prosecuted for political reasons.

Human Rights Watch has called on Biden to scrap the sanctions and urged the court's 123 member states at the meeting that started Monday to “seize the opportunity of an incoming U.S. administration to signal expectations that the U.S. will engage with the court in a manner that respects the court’s Rome Statute, the global rule of law, and victims’ access to justice.”

Part of the agenda for this week’s meeting of the court’s member states is to choose a successor for Bensouda, who is close to completing her nine-year term in office. It is not clear if the selection process will be completed at the meeting or pushed into next year. Bensouda said she aimed to complete the handover to her successor by mid-2021.

In her speech, Bensouda also urged the court's member states to adequately fund prosecutions as her office comes under increasing pressure to probe alleged atrocities around the globe. On Friday, she said that lengthy preliminary probes into alleged crimes in Nigeria and Ukraine have established the need for full-scale investigations in those countries.

“The predicament we are confronted with due to capacity constraints underscores the clear mismatch between the resources afforded to my office and the ever-growing demands placed upon it,” Bensouda said.

She called for “open and frank discussions” about the resources her office needs to do its work, adding that: “The current trajectory is simply not sustainable.”