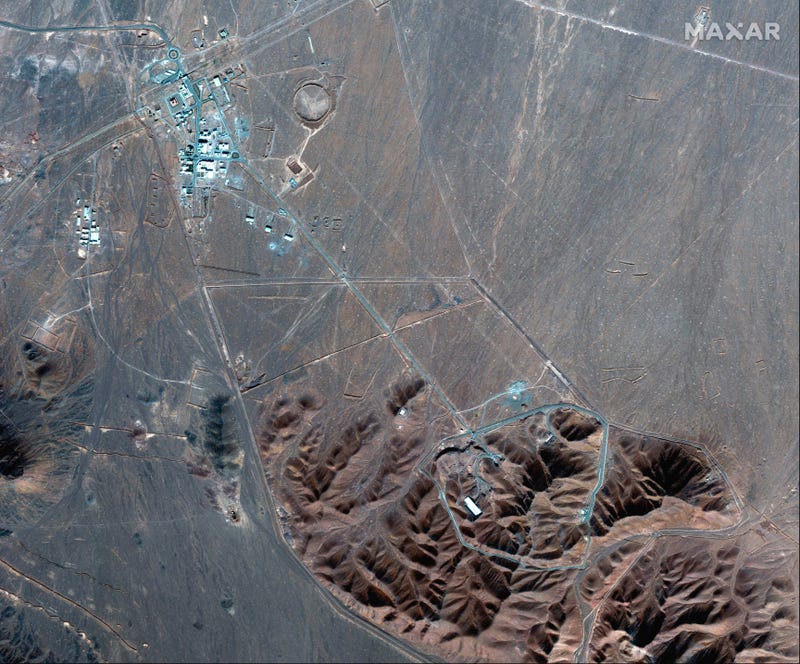 Photo credit FILE - This Nov. 4, 2020, file satellite photo by Maxar Technologies shows Iran's Fordo nuclear site. Iran has told international nuclear inspectors it plans to enrich uranium up to 20% at its underground Fordo nuclear facility, a technical step away from weapons-grade levels, as it increases pressure on the West over its tattered atomic deal. (Maxar Technologies via AP, File)
By The Associated Press

DUBAI, United Arab Emirates (AP) — Iran said Saturday it plans to enrich uranium up to 20% at its underground Fordo nuclear facility “as soon as possible,” pushing its program a technical step away from weapons-grade levels as it increases pressure on the West over the tattered atomic deal.

The move comes amid heightened tensions between Iran and the U.S. in the waning days of the administration of President Donald Trump, who unilaterally withdrew America from Tehran’s nuclear deal in 2018.

That set in motion an escalating series of incidents capped by a U.S. drone strike that killed a top Iranian general in Baghdad a year ago, an anniversary coming Sunday that has American officials now worried about possible retaliation by Iran.

Iran's decision to begin enriching to 20% a decade ago nearly brought an Israeli strike targeting its nuclear facilities, tensions that only abated with the 2015 atomic deal. A resumption of 20% enrichment could see that brinksmanship return.

Even Ali Akbar Salehi, the U.S.-educated head of the civilian Atomic Energy Organization of Iran, offered a military analogy to describe his agency's readiness to take the next step.

“We are like soldiers and our fingers are on the triggers,” Salehi told Iranian state television. "The commander should command and we shoot. We are ready for this and will produce (20% enriched uranium) as soon as possible.”

The White House had no immediate comment. A spokesman for President-elect Joe Biden’s transition team declined to comment on Iran’s announcement.

Iran's decision comes after its parliament passed a bill, later approved by a constitutional watchdog, aimed at hiking enrichment to pressure Europe into providing sanctions relief. It also serves as pressure ahead of the inauguration of President-elect Biden, who has said he is willing to re-enter the nuclear deal.

The International Atomic Energy Agency acknowledged Iran had informed its inspectors of the decision by a letter after news leaked overnight Friday.

“Iran has informed the agency that in order to comply with a legal act recently passed by the country’s parliament, the Atomic Energy Organization of Iran intends to produce low-enriched uranium ... up to 20 percent at the Fordo Fuel Enrichment Plant,” the IAEA said in a statement.

The IAEA added Iran did not say when it planned to boost enrichment, though the agency “has inspectors present in Iran on a 24/7 basis and they have regular access to Fordo.” The parliamentary bill also called on Iran to expel those inspectors, though it appears Tehran still hasn't decided to take that step.

Salehi said Iran would need to switch out natural uranium in centrifuges at Fordo for material already enriched to 4% to begin the process of going to 20%.

“It should be done under IAEA supervision,” Salehi added.

Since the deal’s collapse, Iran has resumed enrichment at Fordo, near the Shiite holy city of Qom, some 90 kilometers (55 miles) southwest of Tehran.

Shielded by the mountains, Fordo is ringed by anti-aircraft guns and other fortifications. It is about the size of a football field, large enough to house 3,000 centrifuges, but small and hardened enough to lead U.S. officials to suspect it had a military purpose when they exposed the site publicly in 2009.

The 2015 deal saw Iran agree to limit its enrichment in exchange for sanctions relief. The accord also called for Fordo to be turned into a research-and-development facility.

After the discovery of Fordo, the U.S. worked on so-called “bunker buster” bombs designed to strike such facilities. As Israel threatened at one point to bomb Iranian nuclear sites like Fordo, U.S. officials reportedly showed them a video of a bunker-buster bomb destroying a mock-up of Fordo in America’s southwestern desert.

As of now, Iran is enriching uranium up to 4.5%, in violation of the accord’s limit of 3.67%. Experts say Iran now has enough low-enriched uranium stockpiled for at least two nuclear weapons, if it chose to pursue them. Iran long has maintained its nuclear program is peaceful.

Iran separately has begun construction on a new site at Fordo, according to satellite photos obtained by The Associated Press in December.

As the anniversary approached, the U.S. has sent B-52 bombers flying over the region and sent a nuclear-powered submarine into the Persian Gulf.

On Thursday, sailors discovered a limpet mine on a tanker in the Persian Gulf off Iraq near the Iranian border as it prepared to transfer fuel to another tanker owned by a company traded on the New York Stock Exchange. No one has claimed responsibility for the mining, though it comes after a series of similar attacks in 2019 that the U.S. Navy blamed on Iran. Tehran denied being involved.

In November, an Iranian scientist who founded the country's military nuclear program two decades earlier was killed in an attack Tehran blames on Israel.