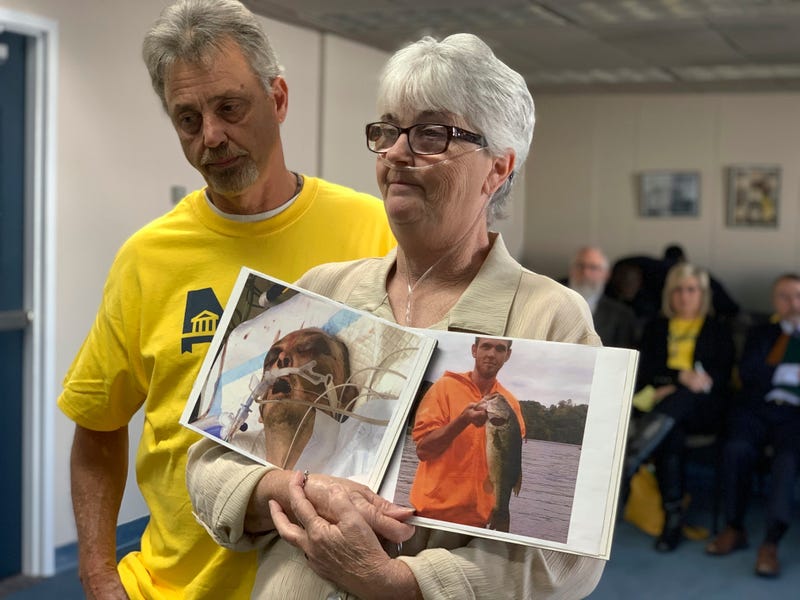 Photo credit FILE - In this Dec. 4, 2019, file photo, Sandy Ray, holds photos of her son, Steven Davis, during a press conference at the Alabama Statehouse in Montgomery, Ala. Davis died in 2019 after an altercation with corrections officers at the prison where he was incarcerated. Ray said she has received little information about his death. The U.S. Department of Justice filed a lawsuit Wednesday, Dec. 9, 2020, against Alabama over conditions in the state prisons, saying the state is failing to protect male inmates from inmate-on-inmate violence and excessive force at the hands of prison staff. (AP Photo/Kim Chandler, File)
By The Associated Press

MONTGOMERY, Ala. (AP) — The U.S. Department of Justice filed a lawsuit Wednesday against Alabama over conditions in the state prisons, saying the state is failing to protect male inmates from inmate-on-inmate violence and excessive force at the hands of prison staff.

The lawsuit alleges that conditions in the prison system — which the Justice Department called one of the most understaffed and violent in the country — are so poor that they violate the ban on cruel and unusual punishment and that state officials are “deliberately indifferent” to the problems. The lawsuit comes after the Justice Department twice released investigative reports that accused the state of violating prisoner’s rights.

“The Department of Justice conducted a thorough investigation of Alabama’s prisons for men and determined that Alabama violated and is continuing to violate the Constitution because its prisons are riddled with prisoner-on-prisoner and guard-on-prisoner violence. The violations have led to homicides, rapes, and serious injuries," Assistant Attorney General Eric Dreiband for the Civil Rights Division, said in a statement announcing the lawsuit.

Alabama had been in negotiations with the Justice Department since the first 2019 report in the hopes of staving off a lawsuit, but federal officials said the state has "failed or refused to correct" the unconstitutional conditions.

The 24-page lawsuit said that conditions in Alabama prisons have gotten worse since the initial findings — with homicides increasing and prisons becoming even more overcrowded than in 2016 when the investigation was initiated.

“The State of Alabama is deliberately indifferent to the serious and systematic constitutional problems present in Alabama's prisons for men,” the lawsuit states.

Alabama Gov. Kay Ivey said she was disappointed by the Justice Department's action.

“This is disappointing news, as the state has actively been negotiating in good faith with the Department of Justice following the release of its findings letters. Out of respect for the legal process, we unfortunately cannot provide additional comment at this time," Ivey said in a statement.

Ivey said she will continue to pursue plans to lease three mega-prisons that would be privately built, each capable of housing thousands of inmates. The governor said those plans "will go a long way in addressing the long-standing challenges faced by the Alabama Department of Corrections.”

The Justice Department's 2019 report described a culture of violence across the state prisons for men with frequent rapes, beatings and fatal stabbings at the hands of fellow prisoners and a management system that undercounts homicides and fails to protect prisoners even when warned.

The July report on excessive force noted that at least two inmates died at the end of 2019 after use of force by officers. It listed a litany of other incidents including a prison guard beating a handcuffed prisoner in a medical unit while shouting, “I am the reaper of death, now say my name!” as the prisoner begged the officer to kill him.

The filing of the lawsuit was welcomed by advocacy groups, inmates and family members.

Sandy Ray last year showed lawmakers a photo of the battered face of her son Steven Davis as he lay in a hospital bed. Davis died in October 2019 after an altercation with corrections officers at William E. Donaldson Correctional Facility. The Justice Department July report, in an apparent reference to the fatality, said that officers "continued to strike the prisoner after he dropped any weapons and posed no threat.”

Ray said Wednesday that she hopes the lawsuit “will help in bringing justice for Stevie.”

One inmate, speaking with The Associated Press by prison wall phone, was jubilant over word of the suit.

"I’m ecstatic," said Kenneth Traywick, an Alabama prisoner who has worked for years as a prison reform advocate.

Traywick, who normally operates under pen name Swift Justice, founded an organization called Unheard Voices OTCJ to describe conditions behind bars. Calling from a wall phone inside Kilby prison, Traywick told The Associated Press that the lawsuit was a “long time coming.”

Other groups said they hope the lawsuit will force Alabama to make overdue changes.

"It has been past time for reform, and it is shameful that our state leaders are once again being forced through litigation to do the right thing for the people of Alabama," JaTaune Bosby, executive director of the American Civil Liberties Union of Alabama, said in a statement.

Carla Crowder, executive director of the Alabama Appleseed Center for Law & Justice, said she hopes that “our lawmakers will finally take this seriously and enact significant criminal justice reform.”