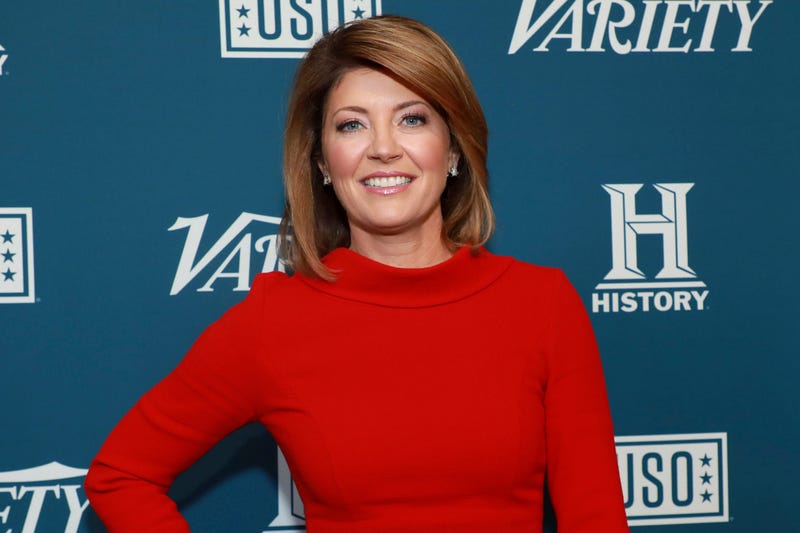 Photo credit FILE - Norah O'Donnell attends Variety's third annual "Salute to Service" celebration on Nov. 6, 2019, in New York. The CBS Evening News anchor says she's "never covered a year in my entire journalistic career like this last year." From the ongoing COVID global pandemic and George Floyd protests around the world to the contested 2020 presidential and last week's storming of the U.S. capitol by armed insurgents, O'Donnell concluded that "journalism is more important than ever." (Photo by Jason Mendez/Invision/AP, File)
By The Associated Press

NEW YORK (AP) — Norah O’Donnell has seen a lot during her career, including her award-winning coverage of the sexual assaults in the Air Force, the Las Vegas mass shooting, and interviews with world leaders. Yet, the CBS Evening News anchor says she’s “never covered a year in my entire journalistic career like this last year.”

From the ongoing COVID-19 global pandemic and George Floyd protests around the world to the contested 2020 presidential election and last week’s storming of the U.S. Capitol by insurgents, O’Donnell says “journalism is more important than ever.”

“There’s a thirst for information because there’s so much going on in the world,” O’Donnell said.

The Emmy-winning anchor credits her parents, who stressed education and the power of information -- reading newspapers, magazines and watching television news -- for her career path.

“They revered the truth. And so, I think that’s probably what led me into journalism, is that I believe information is power and the truth is powerful,” she said.

But the roots go deeper as O’Donnell, featured on the PBS series, “Finding Your Roots,” was surprised to learn from host Henry Louis Gates Jr. of her great grandmother’s exploits protecting worker’s rights in a test case under a new British law after her great-grandfather was killed in a mining accident. She helped take on Scottish company Holmes Oil, and was awarded workers compensation for his death in the first decision of its kind.

“We all wonder who we are, where we came from, what were our ancestors that we didn’t know,” she said.

Recently, O’Donnell spoke to The Associated Press. Remarks have been edited for clarity and brevity.

AP: As one of the most prominent woman in television news, do you see yourself as a role model for other young women?

O’DONNELL: Well, I hope that we’ve made a difference. This year, we’ve tried to cover the stories that people care most about and affect their lives. And we certainly saw since the beginning of the global pandemic, people were hungry for news about what is COVID-19, how is the coronavirus spread? We’ve essentially not only played the role of a news organization, I think we’ve played the role in some ways of a public health organization imparting real health news.

It was very important to me that we be there in Minneapolis following the murder of George Floyd to be there for his memorial to see and talk to people about why they were so outraged. ... We went to Houston for his funeral in Houston because this was a seminal moment in American history not to be eclipsed by a global pandemic, that this movement for racial justice in America should not be eclipsed even by a global pandemic.

AP: What are your thoughts on the connection some are drawing to the Capitol insurgency and the Floyd protests?

O’DONNELL: Given what we saw at the Capitol on Wednesday, immediately you had many people talk about the dissonance between the federal law enforcement and local law enforcement’s reaction to what were the Black Lives Matter protests and the pro-Trump supporters that stormed the US Capitol. The real scary threat of domestic terrorism by extremists and white nationalists. We saw those extremists descend on the U.S. Capitol. And the real journalistic exercise that we’re working through right now is why wasn’t the Capitol Police prepared? Why wasn’t the Justice Department that is in charge of federal law enforcement, why weren’t they prepared to protect the U.S. Capitol? But they did send out thousands of troops when the Black Lives Matter protests were here during the summer. Why was there that difference?

AP: Did you expect COVID-19 to be in the news for this much time?

O’DONNELL: It’s still leading for nearly a year in you know, in fact, it’s worse than it was, much worse than when we started covering the pandemic. I mean, we were talking about in the beginning, hundreds of deaths a day. Now we have around 4,000 deaths a day. I don’t think any of us could have imagined that it would continue to spread so rapidly and so dangerously and without any leadership really from a federal perspective about containing this. Now we’re going to be covering (this story) for the next year because it’s going to be how to roll out the vaccine. And we’ve already seen that Operation Warp Speed is not warp speed. In fact, it’s quite slow.

AP: Tell me what you learned of your great grandmother on “Finding Your Roots”?

O’DONNELL: I guess the one story that that particularly resonates with me is my mom’s mom, my grandmother, who I knew, who grew up in Northern Ireland, Protestant-controlled Northern Ireland. A Catholic who had to walk through barbed fence at the age of 12 to work every day in a linen factory. I have a 12-year old. I can’t imagine my 12-year old having to go to work every morning and not to school in order to support her eight brothers and sisters and her parents. And so those kinds of experiences sear something into someone. And the fact that my grandmother had enough courage to board a boat all by herself and sail across the Atlantic in her 20s to work in Queens, New York, and find work, always reminds me about the independent Irish spirit, the stubbornness and courageousness that my grandmother had in order to make a better life for her family. And for that, I’m always grateful.

music
‘Law & Order: SVU’ cast, ranked by net worth
music
Lady Gaga's stolen dogs have been returned unharmed
1thing
1Thing: What does it mean to be eco-friendly?
1thing
3 reasons why you should choose organic tea
music
Maren Morris and Ryan Hurd on ‘Chasing After You,’ and chasing 1-year-old Hayes around the house
sports
Jeremy Lin reveals he has been called 'coronavirus' on the court