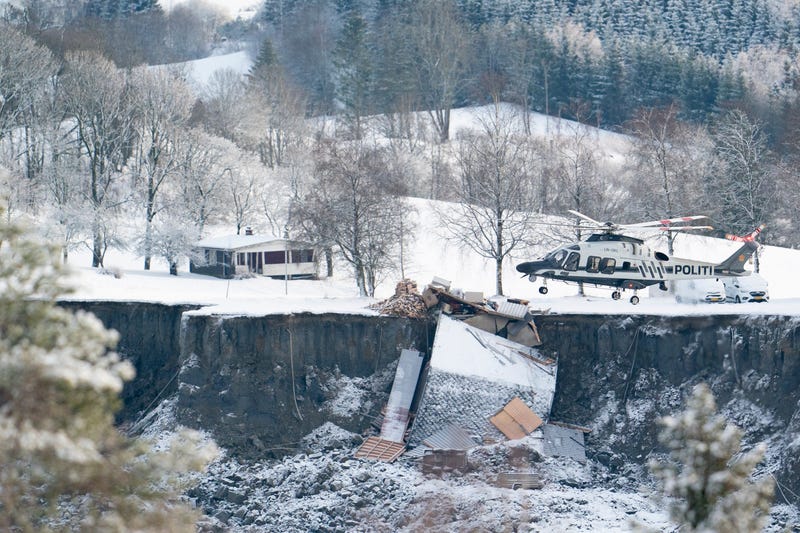 Photo credit Emergency services near the site of a landslide in Ask, northeast of Oslo, Thursday, Dec. 31, 2020. A landslide smashed into a residential area near the Norwegian capital Wednesday. (Fredrik Hagen/NTB via AP)
By The Associated Press

HELSINKI (AP) — Rescue workers in Norway on Thursday continued searching for 10 people, including children, who are missing a day after a massive landslide struck a residential area near the capital.

Time was running out to find survivors in destroyed buildings amid wintry weather conditions. Authorities said it was too dangerous to send ground rescue patrols to the ravaged area in the village of Ask in the municipality of Gjerdrum, some 25 kilometers (16 miles) northeast of Oslo. Instead, the search was carried out with the help of helicopters, drones and heat cameras.

There were no reports of casualties, but some 10 people were injured, one of them seriously, in what Prime Minister Erna Solberg called “probably one of the biggest landslides we have had."

Officials said at least nine buildings with some 30 apartments were destroyed in the early Wednesday landslide.

Over 1,000 people have been evacuated, and officials said up to 1,500 people may be moved from the area amid fears of further landslides.

The landslide cut across a road through Ask, home to some 5,000 people, leaving a deep, crater-like ravine that cars could not pass. Photos and video footage showed dramatic scenes of buildings on the edge of the ravine.

The area is known for having a lot of so-called quick clay, a form of clay that can change from solid to liquid form. Experts said the substance of the clay combined with excessive precipitation and damp weather conditions may have contributed to the landslide.

Norwegian media reported that authorities in 2005 warned building companies not to construct houses in the area, but houses were eventually built there later in the decade.