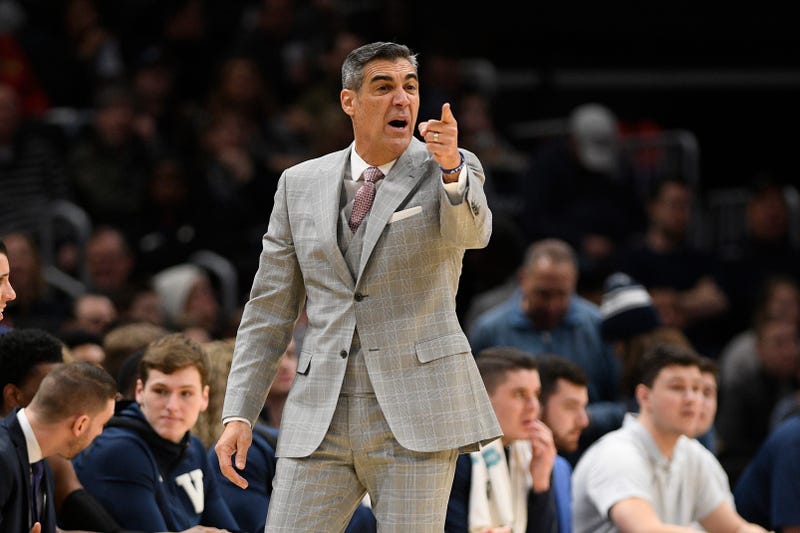 Photo credit FILE - Villanova head coach Jay Wright gestures during the first half of an NCAA college basketball game against Georgetown in Washington, in this Saturday, March 7, 2020, file photo. Villanova coach Jay Wright was set to return to practice Tuesday following his bout with COVID-19. Those plans are on hold after two players tested positive Monday, Jan. 4, 2021, and the Wildcats were forced to postpone their next three games. (AP Photo/Nick Wass, File)
By The Associated Press

The Summit League men’s and women’s basketball tournaments will be held without fans and moved to a smaller venue in Sioux Falls because of the COVID-19 concerns, conference commissioner Tom Douple said Thursday.

The tournament is scheduled March 6-9. It has been originally slated for the Denny Sanford Premier Center, which seats about 12,000, and now will be held at the 3,250-seat Sanford Pentagon.

“It is with deep disappointment, yet an equally deep amount of conviction that we came to this conclusion because the health, safety, and welfare of our student-athletes, coaches, administrators, fans, and the Sioux Falls community remain our highest priorities,” Douple said.

This will be the 13th consecutive year the Summit League basketball tournaments will be held in Sioux Falls.

Offensive left guard Laurent Duvernay-Tardif says he hopes to return to the Kansas City Chiefs next season after opting out of the 2020 campaign because of the COVID-19 pandemic.

The 6-foot-5, 321-pound Canadian was one of the first NFL players to announce he wouldn’t play because of the pandemic after helping the Chiefs win the Super Bowl last year. He opted to work at a long-term care facility in Montreal.

Duvernay-Tardif received his medical degree from McGill University in 2018 and has continued working out.

Temple and Tulane will make up their postponed American Athletic Conference men’s basketball game on Saturday after the other games those two teams were scheduled to play were postponed because of positive COVID-19 cases and contact tracing of student-athletes at East Carolina and Cincinnati.

The AAC said two East Carolina games had been postponed, at home Saturday against Temple and at USF next Tuesday. Cincinnati’s home game against Tulane that was scheduled for Saturday also was postponed. The Temple-Tulane matchup was originally scheduled for Jan. 6.

The AAC also said SMU’s game at Memphis that was postponed has been rescheduled for Jan. 26. Memphis has had three straight games postponed due to a COVID-19 situation involving the opposing team.

The league announced the postponement Thursday, saying it was due to a positive COVID-19 test, quarantining and contact tracing within the Wolfpack program.

This will be N.C. State’s sixth game either canceled or postponed this season, including a run of four in a row in December.

The No. 3 Villanova Wildcats ended a 10-day break for COVID-related reasons and returned to practice on Thursday.

Coach Jay Wright said he hoped he could field a full roster when the Wildcats play Seton Hall on Tuesday at the Pavilion. Villanova hasn’t played since a Dec. 23 win at Marquette.

Wright said he hoped Caleb Daniels and Jermaine Samuels would get cleared in time for next week’s game. The Wildcats are 8-1 overall but just 3-0 in the Big East. The Wildcats need to play the scheduled Big East minimum of 20 games to qualify for the NCAA Tournament.

Wright said “there are a couple of scenarios that look crazy” to cram the schedule with the remaining scheduled games and the handful of games that must be rescheduled to reach 20. Wright says the Big East is considering several options, including the possibility of relaxing the minimum number of games.

Instead of visiting NJIT, the UAlbany women will host Maine at SEFCU Arena on Saturday and Sunday. The women’s series at NJIT will be rescheduled to a new date to be announced later by the America East Conference.

The UAlbany men will still play NJIT at home, but Sunday’s game will be pushed back to accommodate appropriate sanitization of the arena after the women’s game.

Michigan State is postponing a second straight men's basketball game due to a COVID-19 outbreak within its basketball program.

The school says it will not host Indiana on Sunday as scheduled.

The Spartans previously postponed a game at No. 5 Iowa on Thursday night because three players tested positive for the coronavirus. The players include center Mady Sissoko and guard Steven Izzo, son of coach Tom Izzo.

Michigan State and the Big Ten are working on options to reschedule games against the Hawkeyes and Hoosiers.

Two more Georgetown men’s basketball games -- against Providence and Marquette -- have been postponed after the Hoyas reported a positive COVID-19 test.

Georgetown was supposed to play at Providence on Saturday and host Marquette on Jan. 20. Those will make it three consecutive postponements for Georgetown and five overall this season. The Hoyas were supposed to host DePaul on Wednesday.

Coach Patrick Ewing’s team is 3-8 this season and has lost its past five games.

Georgia State has postponed its third straight game because of COVID-19.

The Panthers halted all team activities for a week after multiple positive tests within the program, including athletes, coaches and support staff. That forced the postponement of two games against Sun Belt Conference rival Troy.

Georgia State (7-2) was scheduled to play back-to-back games against Coastal Carolina this weekend, but the Friday contest was called off. The teams are still set to play on Saturday.

Both programs are looking at possible makeup dates.