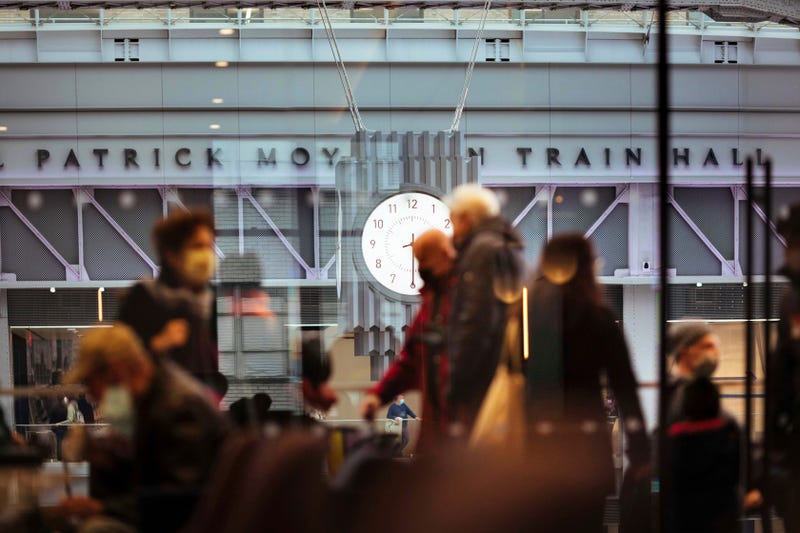 Photo credit FILE - In this Jan. 1, 2021 file photo, The Amtrak Metropolitan Lounge overlooks the newly-completed Moynihan Train Hall in New York. Two major railroad workers unions have asked the Department of Homeland Security to beef up security on Amtrak and other passenger rail lines, including by creating a no-ride list akin to the no-fly list that prevents people identified as risks from boarding planes. The unions said Wednesday, Jan. 13, 2021, that tougher security measures are needed after last week's riot at the U.S. Capitol because people who took part in the insurrection that were placed on the no-fly list may turn to railroads for transportation. (AP Photo/Kevin Hagen File).
By The Associated Press

OMAHA, Neb. (AP) — Two major railroad workers unions have asked the Department of Homeland Security to beef up security on Amtrak and other passenger lines, including by creating a no-ride list akin to the no-fly list that prevents people identified as risks from boarding planes.

The unions said Wednesday that tougher security measures are needed in light of last week's riot at the U.S. Capitol because people who took part in the insurrection and were subsequently placed on the no-fly list may turn to rail travel instead. The Sheet Metal, Air, Rail and Transportation Workers — Transportation Division and the Brotherhood of Locomotive Engineers and Trainmen unions urged federal regulators to add more security at train stations to screen passengers before they board.

“Even as of this hour, the only real requirement for a person to board a train is simply to have a ticket; nothing more, nothing less. There is no screening process. There is no TSA. And there are no significant statutes or regulations to penalize those willing to interfere with a train’s crew or to do harm on a train, especially not when compared to the airline industry,” the presidents of both unions, Jeremy Ferguson and Dennis Pierce, said in a joint statement, referring to the Transportation Security Administration.

The Department of Homeland Security has said it plans to enhance security at railroad stations in the Washington, D.C., area ahead of next Wednesday’s inauguration of President-elect Joe Biden, but it didn’t go into detail on its plans.

Jim Hall, who led the National Transportation Safety Board in the 1990s, said officials should take an in-depth look at railroad security now to ensure that passengers and the dangerous commodities that freight railroads haul are kept safe. He said the Capitol riot showed the threat posed by domestic terrorism.

“I really don’t think anybody could look at the Capitol scene that we all saw and not realize the potential is there for groups that do not have the interests of the United States at heart to affect our transportation system,” he said.

With more than 140,000 miles (225,300 kilometers) of track nationwide and hundreds of different railroads involved it would take time to determine how best to improve security across the network and likely billions of dollars to make the changes. Hall, though, said such a review is overdue.

“I think it’s time to take a hard look at that issue and not wait as we did in aviation to reform the system until after 9/11,” Hall said, referring to the Sept. 11 terrorist attacks. “I’d be surprised if anybody would debate that the current security system around our rail transportation in the United States is adequate to protect the people and the products.”

Amtrak CEO Bill Flynn said he supports the unions' call for a no-ride list for railroads and that he thinks it should be a federal crime to assault a railroad worker, like it is to attack an airline industry worker. He said Amtrak plans to deploy additional police officers on its trains and at stations over the next few days.

“In addition to limiting ticket sales and requiring masks to be worn at all times, we are increasing our police enforcement to ensure strong compliance, remove noncomplying customers and ban those that don’t follow our policies," Flynn said.

The unions also asked the Federal Railroad Administration to intervene and require more security. A spokesman said that agency is reviewing the unions' petition.