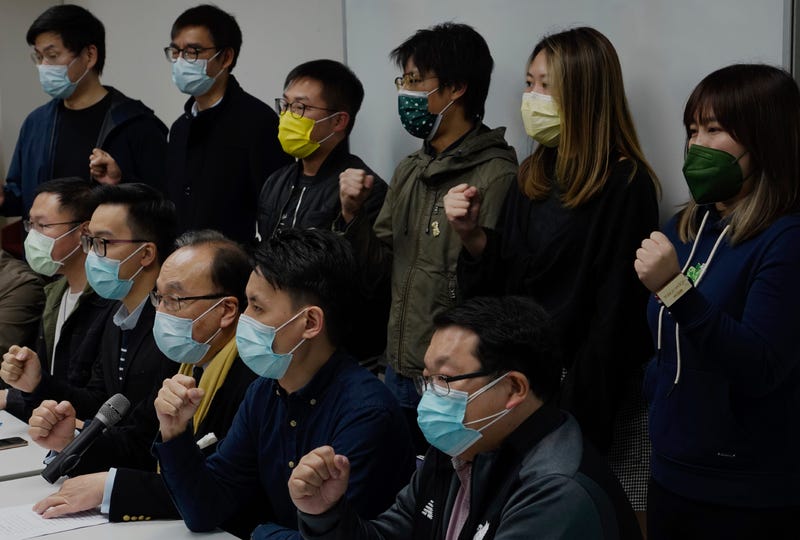 Photo credit Pro-democratic party members shout slogans in response to the mass arrests during a press conference in Hong Kong Wednesday, Jan. 6, 2021. About 50 Hong Kong pro-democracy figures were arrested by police on Wednesday under a national security law, following their involvement in an unofficial primary election last year held to increase their chances of controlling the legislature, according to local media reports. (AP Photo/Vincent Yu)
By The Associated Press

HONG KONG (AP) — An American human rights lawyer who was detained in Hong Kong with scores of democracy activists and supporters as part of a sweeping crackdown was granted bail, his associate said Thursday.

John Clancey, who works at law firm Ho Tse Wai & Partners, was one of 53 people arrested Wednesday under the national security law over their participation in an unofficial primary election last year that authorities say was part of a plan to paralyze the government and subvert state power.

Clancey did not immediately return a call seeking comment.

The mass arrests were the largest move against Hong Kong’s democracy movement since Beijing imposed the law last June to quell dissent in the semi-autonomous territory following months of anti-government protests in 2019.

The primaries were held by the pro-democracy camp to determine the best candidates to field as they sought to gain a majority in Hong Kong’s legislature.

While most of those arrested were candidates in the primaries, Clancey was a treasurer for political organization Power for Democracy, which was involved in the event.

The legislative election that would have followed the unofficial primaries was postponed by a year by Hong Kong Chief Executive Carrie Lam, who cited public health risks during the coronavirus pandemic.

The remaining activists will be granted bail without charge, although most had their passports confiscated as evidence, according to the Hong Kong-based South China Morning Post, which cited unnamed sources.

The security law criminalizes acts of subversion, secession, terrorism and collusion with foreign powers to intervene in the city’s affairs. Serious offenders could face up a maximum punishment of life imprisonment.

Authorities pointed to a plan called “10 steps to mutual destruction" allegedly indicating that the primaries were part of a broader push to cause damage to both Hong Kong and mainland China.

That plan was published as an opinion piece in Apple Daily newspaper by former law professor and pro-democracy activist Benny Tai, who was also arrested on Wednesday. He said that between 2020 and 2022, there would be 10 steps to “mutual destruction,” including the pro-democracy bloc winning a majority in the legislature, intensifying protests, the forced resignation of Lam due to the budget bill being rejected twice, and international sanctions against the ruling Chinese Communist Party.

The arrests drew condemnation from the U.N., the U.S. and Europe.

U.S. Secretary of State Mike Pompeo called them an outrage and said the U.S. would explore further sanctions and restrictions on Chinese and Hong Kong officials and entities.

“I am also appalled by the news of the arrest of an American citizen as part of this campaign of political repression,” he said, adding the United States would not tolerate the arbitrary detention or harassment of its citizens.

Liz Throssell, a spokesperson for the U.N. Human Rights Council in Geneva, said the arrests indicate that “the offence of subversion under the National Security Law is indeed being used to detain individuals for exercising legitimate rights to participate in political and public life.”

Kurt Tong, the former U.S. consul general in Hong Kong, saw the arrests as part of a methodical and escalating campaign to eradicate viable opposition politics both among the protesters and elected parties.

“The national security law provides the legal foundation to do that,” said Tong, now a partner at The Asia Group consultancy in Washington, D.C.

China wants to preserve Hong Kong’s economic vibrancy and free market without what it views as political complications, he said. He didn’t predict a mass exodus by companies, saying the city retains its residual energy and dynamism, but warned there could be a measurable impact over time.

“China’s taking a big gamble by picking away at parts of the Hong Kong system that it doesn’t like,” he said. “It really risks damaging parts that it values.”