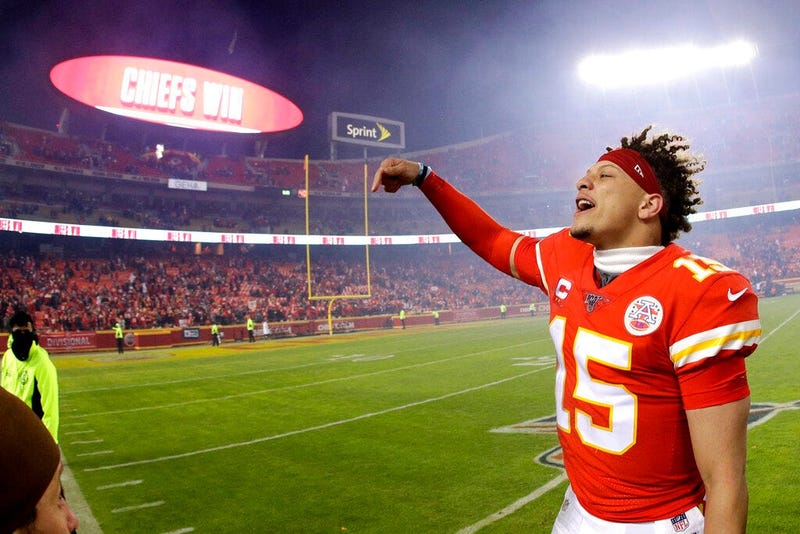 Now they'll meet in the NFC championship for the first time since 1997, when Reggie White, Brett Favre and that Pack bested Steve Young and Ken Norton Jr.

The R&R from the first-round bye proved more like rust, ruin and rubbish in the AFC, where the Ravens and Chiefs, the top two seeds, fell into 22-point and 24-point holes, respectively, in their return to action over the weekend.

Kansas City overcame the 24 points they spotted Houston thanks to last season's NFL MVP, Patrick Mahomes, and some debatable decisions by Texans coach Bill O'Brien in a wild 51-31 win.

Behind Derrick Henry, who's on the greatest eight-game stretch by any running back in the history of a league that's celebrating its centennial season, the Titans are in their first conference championship game in 20 years.

The Chiefs reached their second straight AFC title game at Arrowhead Stadium thanks to a 51-7 run engineered by Mahomes and helped along by O'Brien's decisions not to go for it on fourth-and-inches from the Kansas City 13 and then to try a fake punt on fourth-and-4 from his own 31 minutes later while still ahead 24-7.

Now the Ravens know how the Broncos felt eight years ago when Baltimore upset Denver in double overtime on its way to winning Super Bowl 47.

Riding Peyton Manning's successful comeback from neck fusion surgery that led to his release from the Colts in 2012, the Broncos entered the playoffs riding an 11-game winning streak and earned the AFC's top seed with a 13-3 record. But they lost for the first time in 98 days thanks in large part to safety Rahim Moore's ill-timed jump that allowed Jacoby Jones to haul in a 70-yard touchdown pass from Joe Flacco in the final minute of regulation.

That, and coach John Fox's decision to have Manning take a knee with two timeouts and 31 seconds remaining, playing for overtime instead of a last-second retort.

The 2019 Ravens went 14-2, the best regular season in franchise history, earned a No. 1 seed for the first time, and received a record-breaking performance from Jackson, their second-year QB who turned the NFL upside down with his unmatched mobility and improved pocket presence. They had 12 players picked to the Pro Bowl, tying a record, and five All-Pros.

And they lost in the divisional round.

"This game is going to be the one that we’ll remember because it’s the last one," coach John Harbaugh said. “I told them, in the end, there’s only one team that gets to be the one true champion — and that’s not going to be us this year."

Jackson set an NFL record for yards rushing by a quarterback (1,206) and led an offense that compiled more yards on the ground (3,296) than any in league history. Although he accounted for more than 500 yards of offense against the Titans, Jackson committed three turnovers and was twice stuffed on fourth-and-1 runs in falling to 0-2 in the playoffs.

In addition to finishing sixth in the league in rushing, Jackson threw for 3,127 yards and 36 touchdowns with only six interceptions. But he was picked off twice and lost a fumble against Tennessee.

"I need to improve on everything, whether it's running, throwing the ball, pocket poise, everything," Jackson said.

For a while Sunday it appeared as though the fourth-seeded Texans would be hosting the AFC championship next weekend. But they imploded after jumping out to a big early lead and O'Brien faced the heat for his fake punt that Daniel Sorensen sniffed out in time to stop Justin Reid shy of a first down, giving the Chiefs a short field for a quick touchdown en route to scoring 41 consecutive points.

"We felt like we had to manufacture some points, manufacture some yards and it just didn't work out. When you're playing a team that is that explosive on offense, you've got to try and keep scoring," said O'Brien, who also took heat for kicking a short field goal on fourth-and-inches rather than going for the first down and potentially a 28-0 lead.

The Texans became the first team in NFL history to lead a playoff game by at least 20 points and then lose by at least 20, and the 24-point lead they squandered tied for the fourth-biggest in playoff history.

Houston quarterback Deshaun Watson came to his coach's defense when asked if he's the right man to lead the Texans.

“You might have doubt, but I don’t,” Watson said. "I love that man, and I’ll always play hard for that man. You all can say what you want to say in the media, but as long as I’m at quarterback, he’s cool with me. He’s got my heart."