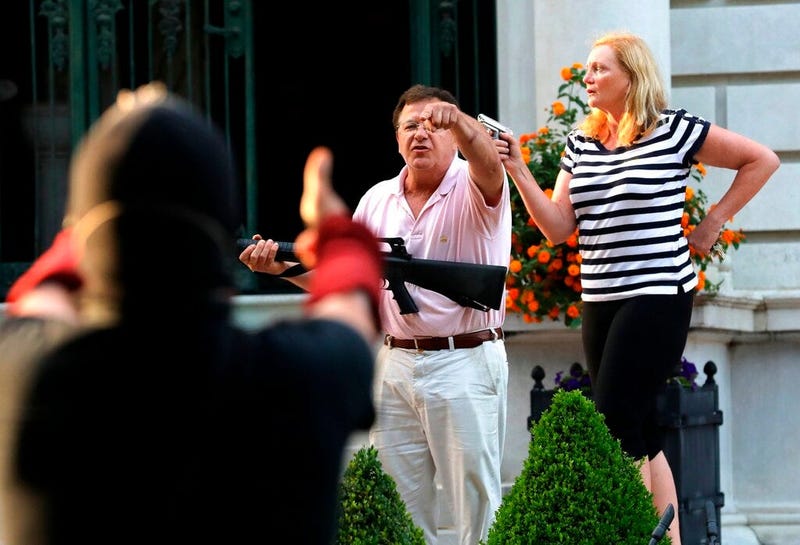 A couple who stood outside their St. Louis mansion held guns as protesters supporting the Black Lives Matter movement moved through thier neighborhood.

Video posted online showed Mark McCloskey, 63, and his wife, Patriciam 61, standing outside their Renaissance palazzo-style home Sunday night in the city’s well-to-do Central West End neighborhood as protesters marched toward the mayor’s home to demand her resignation. He could be heard yelling while holding a long-barreled gun. His wife stood next to him with a handgun.

Mark McCloskey said that he and wife, who are personal injury lawyers, were facing an “angry mob” on their private street and feared for their lives Sunday night.

No charges were brought against McCloskeys. Police said they were still investigating but labeled it a case of trespassing and assault by intimidation against the couple by protesters in the racially diverse crowd.

However, Circuit Attorney Kimberly Gardner issued a statement later Monday characterizing what happened differently and saying her office was working with police to investigate the confrontation.

“I am alarmed at the events that occurred over the weekend, where peaceful protesters were met by guns and a violent assault,” she said. “We must protect the right to peacefully protest, and any attempt to chill it through intimidation or threat of deadly force will not be tolerated.”

Their attorney, Albert Watkins, told The Associated Press on Monday that the couple are long-time civil rights advocates and support the message of the Black Lives Matter movement. He said they grabbed their guns when two or three protesters — who were white — violently threatened the couple and their property and that of their neighbors.

The marchers were angry at Mayor Lyda Krewson for reading aloud the names and addresses of several residents who wrote letters calling for defunding the police department. The group of at least 500 people chanted, “Resign, Lyda! Take the cops with you!” news outlets reported.

Police said the couple had heard a loud commotion in the street and saw a large group of people break an iron gate marked with “No Trespassing” and “Private Street” signs. The video showed the protesters walking through the gate and it was unclear when it was damaged.

The McCloskeys' home, which was featured in the local St. Louis Magazine after undergoing a renovation, was appraised at $1.15 million.

Krewson has faced demands for her resignation since a Facebook Live briefing on Friday in which the white mayor read the names of those who wrote letters about wanting to defund the police force. The video was removed and Krewson apologized the same day, saying she didn't intend to cause distress.

The Rev. Darryl Gray, an organizer with ExpectUs, who used a megaphone to urge protesters to keep moving after the couple brandished firearms, blamed Krewson, saying she “threw gasoline on an already burning fire” by releasing people's home addresses.

“In this climate of hatred and this climate of fear and the concern activists have for safety, we didn’t feel that this was the most prudent thing to do in this particular time,” Gray said. “It is a sign that she just does not know or does not care.”

The names and letters are considered public records, but Krewson’s actions caused a heavy backlash.

“As a leader, you don’t do stuff like that. ... It’s only right that we visit her at her home,” said state Rep. Rasheen Aldridge, a St. Louis Democrat, speaking into a megaphone at the march.

Protesters nationwide have been pushing to “ defund the police ” over the death of George Floyd and other Black people at the hands of law enforcement. Floyd, who was handcuffed, died May 25 after a white Minneapolis police officer pressed his knee on Floyd’s neck for nearly eight minutes.

Krewson, a longtime alderwoman, was elected St. Louis' first female mayor in 2017 by pledging to work to reduce crime and improve poor neighborhoods. She and her two young children were in the car in front of their home in 1995 when her husband, Jeff, was slain during a carjacking attempt.

Homicides have spiked in recent years in St. Louis, which annually ranks among the most violent cities in the nation.