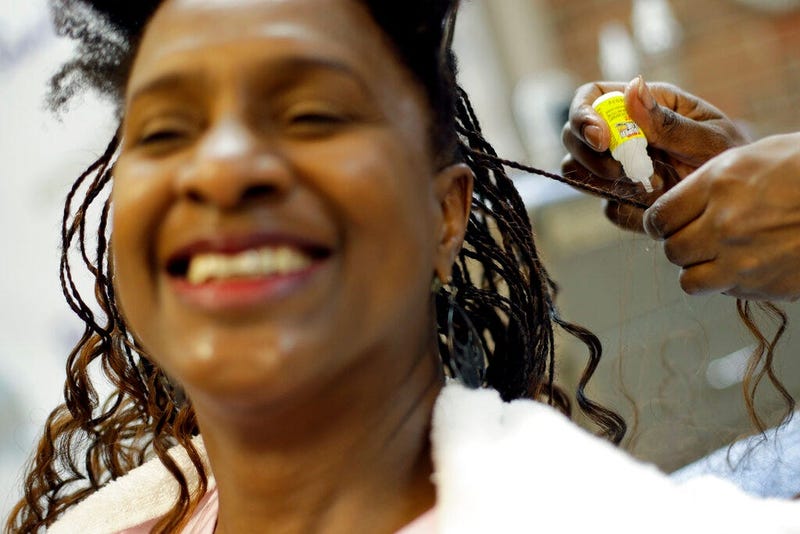 Black female legislators in two predominantly white Midwestern states urged their Republican colleagues Tuesday to join a national push to outlaw discrimination based on hairstyles such as braids and dreadlocks.

Legislative committees in Kansas and Wisconsin held separate hearings on similar proposed revisions to their states' anti-discrimination laws. Four black female legislators in Wisconsin and one in Kansas, all of them Democrats, said employers and teachers often wrongly see white people’s hair as the standard for what's clean and professional.

“Imagine waking up every morning knowing you’ve got to go to work and can’t be yourself,” Wisconsin state Rep. LaKeisha Myers, a black Milwaukee Democrat, said during an Assembly Constitution and Ethics Committee hearing. She is the chief sponsor of the bill in Wisconsin's Assembly.

The proposals would ban bias in housing, employment and public accommodations based on hairstyles “historically associated with race” such as braids, locs and twists.

The Democrat lawmakers and other supporters of the legislation said black women have felt compelled for years to straighten their hair with harsh chemicals or hot appliances to avoid affecting their chances of getting a job, winning a promotion or staying employed.

California, New York and New Jersey enacted such laws last year and similar measures have been introduced in 20 other states, including Kansas and Wisconsin, according to the CROWN Coalition, a movement founded by beauty products maker Dove and the National Urban League, Color Of Change and the Western Center on Law and Poverty advocacy groups.

It wasn't clear how far the Kansas or Wisconsin measures will get. Supporters in both states faced questions about how broadly such laws could be interpreted.

Kansas Chamber of Commerce lobbyist Kristi Brown said in a written statement to the Kansas Senate Federal and State Affairs Committee that such a law could affect an employer's ability to enforce a dress code or even comply with some safety standards.

In the Kansas hearing, Sen. Rob Olson, a white Kansas City-area Republican, said he supports people's right to express themselves through hairstyles but said allowing restaurants to impose hair-related health standards as perhaps “the biggest challenge” to enacting it.

And the chairman of the Wisconsin Assembly committee, Rep. Chuck Wichgers, a white suburban Milwaukee-area Republican, said that he would have convince other lawmakers that the bill wouldn’t open a “Pandora’s box” where anyone of any race could accuse an employer of discrimination.

“How do we explain to other legislators that if you have dreads, you can sue to get what you wanted?” Wichgers said.

Supporters of the legislation in both states cited a December 2018 incident in which a high school wrestler in New Jersey was told he had to cut off his dreadlocks or forfeit a match. The sponsor of the Kansas measure, state Sen. Oletha Faust-Goudeau, a Wichita Democrat and her chamber's only female black member, passed around copies of a photo of the wrestler having his hair cut.

But backers of the bills said straightening hair to fit in at school or work or to have a better chance at getting a job has been part of the African-American experience for years.

“I don't know any black woman that has not experienced getting relaxer and not having her hair burned, or the scabs on your scalp and having to put creams on your scalp to heal the scabs that you may get from a chemical burn,” said Michele Watley, founder of Shirley's Kitchen Cabinet, a Kansas City group that advocates for black women.

Watley said anti-bias laws like the one proposed in Kansas still would allow employers to impose safety and health requirements, such as requiring shorter hair to avoid getting it caught in machinery.

Bridget Dunmore, a retired Internal Revenue Service worker from Raymore, Missouri, said in the 37 years she worked, she always straightened her hair for job interviews rather than wearing it in braids, as she prefers. She was in a Kansas City, Kansas, hair salon on Tuesday, and reflected on how she saw straightening her hair as a “means to an end” when she was younger but now sees feeling compelled to do it as discrimination.

“The more natural, beautiful hairstyles will affect, will most likely prevent, me from getting a job,” said Dunmore, who is black. “Individuals are focusing too much on the outer appearance of our natural hairstyles.”

Faust-Goudeau said the issue has become almost an emotional one for her, because, as the mother of two daughters, “I deal with it on a personal level.”