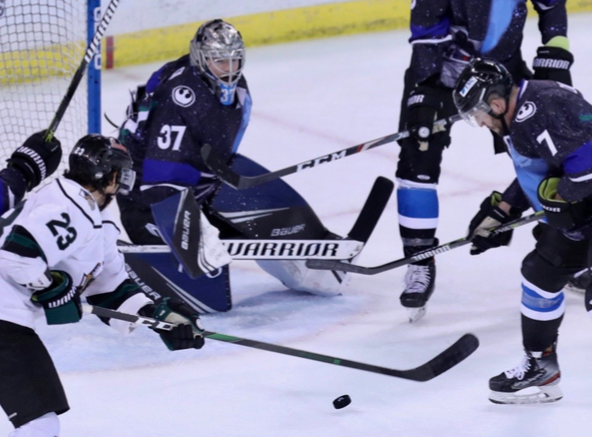 Jason Salvaggio scored twice, and Mitch Gillam stopped 32 shots to claim his seventh-career shutout, as the Wichita Thunder shut out the Utah Grizzlies 3-0 on Friday night at Intrust Bank Arena.

Salvaggio opened the scoring in the first when he found the puck in the neutral zone and started an odd-man break. He fired a wrist shot past the blocker of Mason McDonald to give the Thunder a 1-0 lead heading into the first intermission.

Both teams played strong defensively with very little offense either way in the second. Gillam stopped 14 shots in the second period to keep the score 1-0 with one period to play.

The Thunder killed off a penalty after Jacob Graves was called for slashing at 11:34 in the final frame. The goaltenders held strong until the final minutes when McDonald headed to the bench in favor of the extra attacker. The Thunder added two empty-net goals to push the lead to 3-0 as Salvaggio and Spencer Dorowicz scored.

Wichita collected its first shutout of the season by one of its netminders. Salvaggio has goals in three-straight with four over that span and goals in four of his last five outings. Shaquille Merasty, Chris Crane and Fabrizio Ricci each collected helpers.

The Thunder continues their weekend homestand tonight as they host the Kansas City Mavericks for #ILOVEWICHITA Night starting at 7:05 p.m.