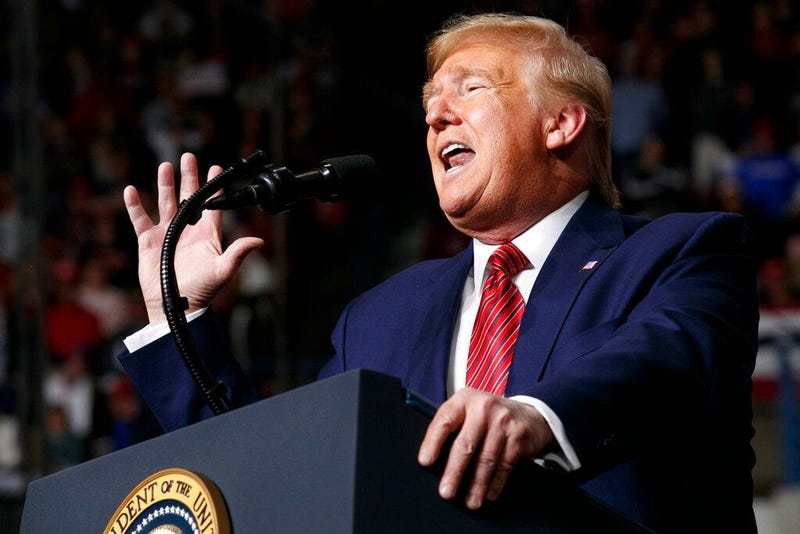 President Donald Trump lashed out Friday at Democrats who have questioned his handling of the coronavirus threat, calling their criticism a new “hoax” intended to undermine his leadership.

At a political rally in South Carolina, Trump sought to steal some of the spotlight from his Democratic rivals who were campaigning across the state on the evening before its presidential primary.

Trump accused Democrats of “politicizing” the coronavirus threat and boasted about preventive steps he's ordered in an attempt to keep the virus that originated in China from spreading across the United States.

Shortly before Trump began to speak, health officials confirmed a second case of coronavirus in the U.S. in a person who didn't travel internationally or have close contact with anyone who had the virus. The president did not mention that news.

“They have no clue. They don't have a clue. They can't even count their votes in Iowa,” Trump said, referring to problems that plagued the Democrat vote in the Iowa caucuses Feb. 3.

“They tried the impeachment hoax. ... This is their new hoax,” Trump said of Democrat denunciations of his administration's coronavirus response.

Some Democrats have said Trump could have acted sooner to bolster the U.S. response to the virus. Democrat and Republican lawmakers also have said his request for an additional $2.5 billion to defend against the virus isn't enough. They've signaled they will provide substantially more funding.

Trump said Democrats want him to fail and argued that steps he's taken so far have kept cases to a minimum and prevented virus deaths in the U.S.

“A virus that starts in China, bleeds its way into various countries all around the world, doesn't spread widely at all in the United States because of the early actions that myself and my administration took, against a lot of other wishes, and the Democrats' single talking point, and you see it, is that it's Donald Trump's fault,” he said.

The president acknowledged the virus could lead to deaths in the U.S., but said, “We're totally prepared.”

It was the fourth time Trump had rallied his supporters just before a state's Democrat presidential nominating contest. He did so in Nevada last week even though Republicans had canceled their presidential caucus to show allegiance to Trump. Likewise, South Carolina GOP officials opted not to hold a primary this year. Trump also held rallies before the Iowa caucuses and the New Hampshire primary.

The North Charleston, South Carolina, crowd lapped it up when Trump sought their participation in an informal poll to determine which Democrat candidate would be the best opponent for him.

The crowd shouted for Vermont Sen. Bernie Sanders, who was virtually tied in Iowa and won contests in New Hampshire and Nevada, and booed the mention of former Vice President Joe Biden.

Some state GOP leaders have urged Republican voters to participate in Saturday's Democrat primary to vote for Sanders.

Unlike the three earlier voting states, South Carolina is not considered a swing state. Trump defeated Hillary Clinton there by more than 14 percentage points in 2016.

Trump arrived in South Carolina at the end of a brutal week for the stock market as investors reacted to the coronavirus threat. Stocks sank again Friday after another wild day on Wall Street, extending a rout that handed the market its worst week since October 2008, at the height of the financial crisis.

Trump has linked his presidency to the markets through tweets and speeches often taking credit for each new high in the markets. Now, Trump is trying to reassure Americans the economy is still strong while also theorizing that the Democrat candidates’ debate performances have spooked investors.