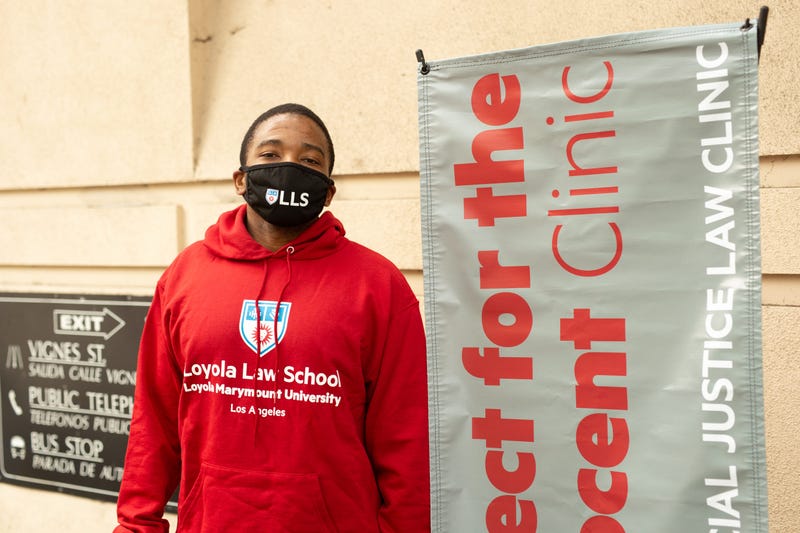 September 11, 2020 09/11/2020 11:42 pm
After spending more than half his life behind bars, a Los Angeles man is free.
A judge agreed there are legal questions about his sentencing and guilt.
Emon Barnes, 34-years-old, was in prison for 19 years. He was convicted in a gang shooting in Los Angeles in 2001. He left Men's Central Jail Friday.
"It's been a lot and there have been so many ups and downs. So I'm just thankful," he said.
The Loyola Project for the Innocent took on the legal fight to get him out. According to the Loyola Project for the Innocent press release "Tried in adult court in 2001, Barnes was convicted of gang crimes based largely on statements by a teenage witness who has now recanted his testimony. After the jury returned a guilty verdict, one juror had a tearful change of heart and tried to take it back, but it was too late. Barnes was sentenced to a term of 40 years to life."
Barnes was convicted as a 15-year-old of a gang shooting that injured one and left another paralyzed.
According to the Loyola Project for the Innocent press release: "“LPI has been investigating this case for nearly six years, and we firmly believe in our client’s innocence,” said LPI Program Director Adam Grant. “In fact, we uncovered substantial evidence pointing toward someone else entirely as the perpetrator.”   “The more we investigated, the more obvious it became that Emon was innocent,” said LPI Staff Attorney Michael Petersen. “Emon was not in a gang. He was a quiet kid in a bad neighborhood. The police were simply way off when they set their sights on him.”

LPI’s investigation continued into 2020 but stalled with the arrival of COVID-19.

“The pandemic created two serious problems for Emon,” said LPI Program Director Paula Mitchell. “Our office had to slow down our investigation into his case during the quarantine while, at the same time, Emon sat in a cell at San Quentin, which was experiencing a serious COVID-19 outbreak. We became extremely concerned about Emon’s health and safety because he has an underlying health condition that put him at greater risk, should he contract COVID-19.”
Barnes did contract COVID-19 while in prison and did recover. It did help expedite his release.
Attorneys now have the legal fight of proving him legally innocent.

Welcome home Emon Barnes!! After being arrested at age 15 and spending 19 years incarcerated for a crime he did not commit, Emon was released today to his mother, family and many supporters. pic.twitter.com/QFbdIoRxYs