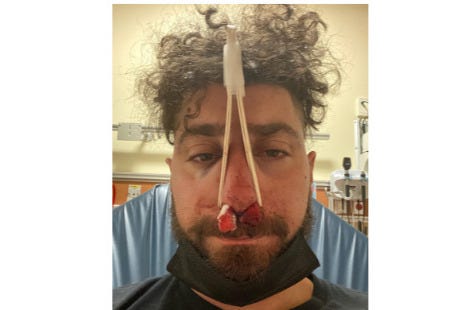 A San Diego bartender was violently attacked over Labor Day weekend by a customer outraged by the bar's mask policy.

Tony Aversa was working his usual shift at 710 Beach Club in the Pacific Beach neighborhood of San Diego when a couple of maskless customers began arguing with the doorman to be allowed entrance to the bar. When the doorman refused to let them in due to San Diego’s coronavirus restaurant regulations, Aversa stepped in to help him out. That's when one of the patrons ran toward him Aversa and sucker-punched him in the face, breaking his nose.

“I immediately knew my nose was broken,” Aversa said. “I could hear it pop. I kind of went black for a second. I immediately felt blood gushing out of my nose all over the cement, all over my hands.”

Witnesses to the attack said the man then left the bar and drove off. He was described at 6'2" with curly brown hair and weighed about 260 pounds.

Aversa is expected to be out of work for a month to recover and says he's concerned about returning.

“Definitely now is something that is always going to be on my mind,” Aversa said. “I’ve been in the bar industry for almost a decade at this point, and I’ve seen plenty of bar fights, stuff like that, but as far as a clean completely unknowing sucker-punch, that is the first time something like that has happened to me.”

A GoFundMe page has been set up for Aversa to help him with his medical and living expenses while he's out of work.