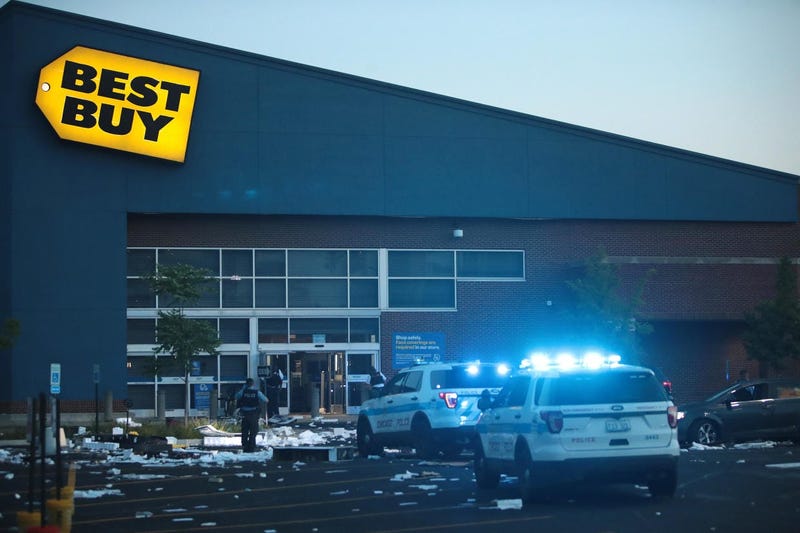 Chicago's police commissioner says more than 100 people were arrested following a night of looting and unrest that left 13 officers injured and caused damage in the city's upscale Magnificent Mile shopping district and other parts of the city. Police Superintendent David Brown says it "was not an organized protest" but instead "an incident of pure criminality."

At one point, shots were fired at police and officers returned fire, but there were no reports of injuries from the gunfire. Brown says a heavy police presence is expected in the downtown area until further notice.

Those arrested were expected to face charges including looting, disorderly conduct, battery against police.

Chicago Mayor Lori Lightfoot says the city has activated a neighborhood protection program that will be in place "for foreseeable days until we know our neighborhoods are safe."

It wasn't immediately clear what led to the unrest, which began shortly after midnight, but hours earlier, CBS Chicago reported dozens of people had faced off with police after officers shot and wounded a person Sunday in the city's Englewood neighborhood.

Along the Magnificent Mile, people were seen going in and out of stores carrying shopping bags full of merchandise as well as at a bank, CBS Chicago reported, and as the crowd grew vehicles dropped off more people in the area.

Tom, the owner of Wabash Jewelers, told the station that the looting was coordinated. "There was no anger.  They politely told me that were going inside," he said.

He said the looters drove up in cars, carrying bricks to break the glass.  As they left, they ran to nearby U-Hauls to put the stolen loot inside.

CBS Chicago reports that video shows multiple cars parked on the streets as people ran out and broke into stores. Former Bears player Patrick Mannelly witnessed the looting from his high-rise condo and saw cars driving up to a U-Haul truck and putting stolen goods into the trailer.

The Gold Coast is being looted right now. What the hell is going on @chicagosmayor ? 3:11am. WTF! pic.twitter.com/SF0x4q6LIb

THEY ARE LOOTING PORTILLO'S @portilloshotdog AND WALGREENS. I CALLED 911, BUT NO POLICE AT ALL! Hundreds of looters @Chicago_Police #ChicagoScanner #chicagoriots #looting #chicago @CWBChicago @Chicago_Scanner pic.twitter.com/bRXKVEfTRj

One officer was seen slumped against a building, several arrests were made and a rock was thrown at a police vehicle, the newspaper said. Police worked early Monday to disperse the crowds.

In the earlier shooting in Englewood, police said in a statement that they responded about 2:30 p.m. Sunday to a call about a person with a gun and tried to confront someone matching his description in an alley. He fled from officers on foot and shot at officers, police said.

More than an hour after the shooting, police and witnesses said a crowd faced off with police after someone reportedly told people that police had shot and wounded a child. That crowd eventually dispersed.