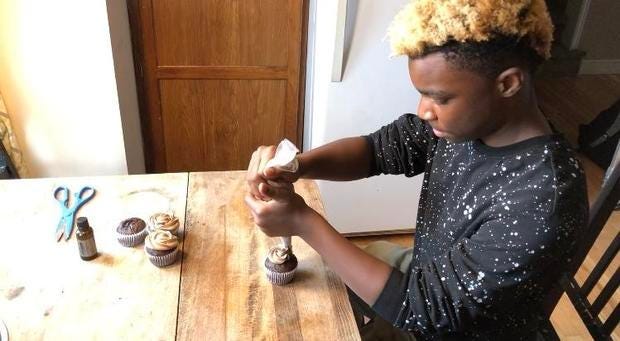 Out of a home bakery in Bowie, Maryland, a young entrepreneur creates treats that are as delicious as they are helpful. For each cupcake this baker sells, he gives one away to someone in need. Behind the operation is 14-year-old Michael Platt.

Platt started baking with his grandmother at nine years old, and by 11, he was open for business. He calls his company "Michael's Desserts" and his business model based on another philanthropic company. "I knew I wanted to start a business, but I didn't really know how to do it, I guess," Platt told CBS News while baking peppermint chocolate cupcakes at home.

"My parents got me a pair of Tom's shoes for Christmas. And Tom Shoes' business model is one-for-one, which is my business model," he said.

Platt recently got an order for a few dozen cupcakes, and as promised, he doubled the order and packed up the extra cupcakes to bring to a homeless shelter. The teen visits several shelters in the DMV area, and he also hands out cupcakes to homeless people on the street.

"But, when your kids say they're interested in doing something — something so positive — you're going to do what any parent does and make it work," she said.

Platt, now a freshman, is homeschooled so he can focus on his business and charity, P.L.L.A.T.E., which is an acronym for power, love, learning and access to everyone.

Platt hopes to open a pay-what-you-can grocery store for people who want to shop for affordable items. The nonprofit also offers seminars for grocery shopping on a budget and gardening to give people more food options.

As if running the bakery and charity wasn't enough, Platt partners with No Kid Hungry and raises money for the organization which helps children in need of food. He's also been a contestant on Food Network's "Kids Baking Championship."

On top of all of that, Platt recently gave a TED talk on being a young entrepreneur. He hopes his story inspires people to help others. "[Kids] can do what they love to do what they do and also be able to help people," he said as he iced his peppermint cupcakes.

"If everyone does what they can to end a problem that they're passionate about, then the problem will end," he said. Then, he packed up 48 cupcakes in his personalized boxes and brought them to a homeless shelter in Silver Springs, Maryland – just in time for dinner.